If all the cars I've run, the Clio V6 255 has been the best, and by some margin. I wouldn't be surprised if we have just said an emotional goodbye to the highest-mileage example in the country, and nothing much has gone wrong in a year and 24,000-plus miles. Indeed the only downside I can see is that HV53 VJO is worth a chunk less than lower-mileage examples of the same vintage. 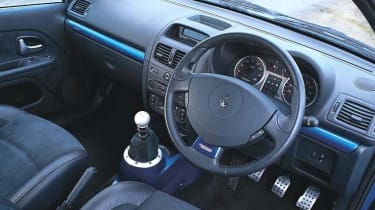 If all the cars I've run, the Clio V6 255 has been the best, and by some margin. I wouldn't be surprised if we have just said an emotional goodbye to the highest-mileage example in the country, and nothing much has gone wrong in a year and 24,000-plus miles. Indeed the only downside I can see is that HV53 VJO is worth a chunk less than lower-mileage examples of the same vintage.

'Our' car, number 005 of the UK allocation, arrived in mid October last year with 1000 miles on the clock, and by bonfire night had over 5000 on its odometer. We already knew it was a dramatically better sorted car than the first generation V6, but its performance at our Car of the Year test (which accounted for those rapidly racked miles) was more impressive than we'd imagined.

HV53 VJO came through the 'real world' part of the test in third place, behind the VX220 Turbo and Impreza Spec C, but when we got to Italy for the money-no-object, no-holds-barred section of the contest, the Clio's appeal got stronger. Why? I think because its depth of character and ability was brought into sharp focus by cars like the 911 GT3, 360 Stradale and Gallardo that ought to have proved more exciting and special. Far from exposing the Clio as a poor man's mid-engined exotic, they showed what a well-sorted, capable and entertaining pocket supercar RenaultSport had fashioned. It finished third overall.

The wide-bodied, funky little Clio's allure didn't lose its sparkle after 12 months. Finding it on the drive each morning never failed to give my day a lift. The only disappointment was stepping outside on a weekend and realising that family excursions were out of the question - I doubt there has ever been a more useless hatchback made (mk1 Clio V6 and mid-engined 5 Turbo apart). Still, the netted shelf space behind the seats was big enough for a Maclaren buggy, and the passenger airbag was readily disarmed, so two-year-old Evan Barker and I enjoyed the morning trip to nursery and the odd trip to the shops, packing purchases into the footwell and occasionally the water resistant (but not waterproof) front cubby where the engine should have been.

After glugging down a litre of oil mid-way through ECOTY, the Clio's rumbling 255bhp V6 required only another half litre outside of general servicing. Its thirst for fuel varied between 21 and 25mpg, and we fed it almost exclusively on Shell Optimax, having discovered early on that it eradicated a couple of slight flat-spots. It's a great engine, the heart of the car, big on character and with an easy-going, gutsy delivery that makes brisk progress effortless. It's also strong closing in on the 7500rpm redline, and after 24,000 miles revved more freely and with more vigour. The snappy, positive shift of the six-speed 'box was perhaps a little looser too, but not so as to give concern.

The rarity of the Clio surprised me - I saw only a couple of others in a year - and everyone who wandered up for a closer look loved it. Many knew exactly what it was, while others were genuinely surprised to find a hulking great V6 nestling where the rear seats ought to have been. Clio V6 owners who wrote in all said what an amazingly positive reaction the car gets.

Let people drive it, as we did when generous owners loaned us their cars for our Car of the Decade feature (066), and they love it even more. How frustrating, not to say short-sighted, then, that according to a few of our readers some dealerships made it very difficult to test-drive a V6, a couple asking for a few hundred quid up front (refundable on purchase). Quality of service does vary, as staff photographer Andy Morgan discovered when he ran a Clio Cup, and he recommended West's Garage (Cambridge) Ltd for the V6's 12,000-mile service. The bill came to a reasonable £184, and West's also reset the over-sensitive alarm.

There was much a bigger bill at 24,000 miles, when the front brake pads were replaced. They cost a staggering £228, plus fitting, more than doubling the cost of the service and proving that the Clio is indeed a low-volume, miniature exotic. A left front puncture was also costly, and problematic. The sidewall was pinched so the on-board tyre mousse didn't work, and because the Michelin Pilot Sport was a new tyre, and an unusual size, it took three working days to source. It cost £242 and, not long after, the worn rears needed replacing, which cost £500.

Getting 20,000 miles from the front tyres and 12,000 from the rears isn't too bad, though. The V6 isn't a car that you drive to the point where the tyres are sliding, because it's not a car whose neck you have to wring to get your kicks. Yes, you can wind the engine round to the limiter and nudge the edge of grip offered by those excellent Michelins, but the Clio is equally engaging and entertaining when you're simply surging along on the V6's torque. Its ability to feel special even when you're not extracting its full potential is very 911-like, very satisfying.

The Clio is a genuine exotic - both in looks and in the sacrifices you make to live with it, but most of all in the way it makes you feel and the depth of its ability to entertain. As a bonus, it doesn't come with the social hang-ups of some exotics.

It's a bargain at £27K new, and our year-old example is a steal - we were quoted a trade-in price of around £17,500, even though you won't find many on sale at less that £20K. Pristine mk1 Clio V6s are fetching prices in the mid-teens, and considering the fact that the mk2 is sooo much better, the trade-in value looks really derisory.

The miles don't appear to have diminished HV53 VJO's ability. There are a couple of small rattles and a few stone chips but I'm sure there are many, many more good miles left in it. If it wasn't for a house build and the arrival of baby Barker number two, Seth, I would have been seriously tempted to make an offer to keep it. It's a modern classic.