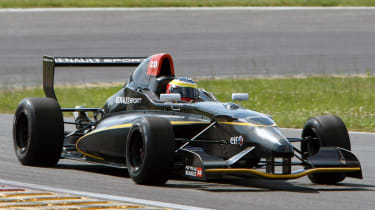 Renaultsport has been working on a new Formula Renault single-seater that will be available for the 2010 season.

The new chassis is home to the 2-litre naturally aspirated engine from the RS Clio (read our Clio Cup review), mated to a seven-speed sequential gearbox that’s operated by electronic paddles. Former Eurocup Formula Renault winner Filipe Albuquerque was one of the drivers involved in the developing the car. It’s said to be more involving than the outgoing model, which has been around since 2000. The new cars will be built alongside the Clio 200 and new Mégane 250 at the Renaultsport factory in Dieppe.

Formula Renault was founded in 1971 and is now the biggest one-make single-seater championship in the UK. It has been a stepping-stone to Formula One for the likes of Lewis Hamilton and Kimi Raikkonen. Indeed, the latter went straight into F1 after winning the British Formula Renault Championship.