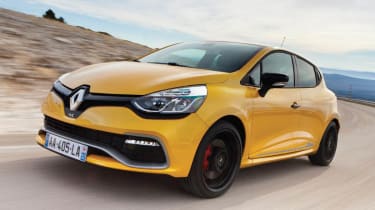 Renault has confirmed technical details and equipment levels of the new Renaultsport Clio 200 Turbo. And while prices are yet to be confirmed for the UK, we can expect to pay around £19,000 when sales begin in April. The model marks a departure from the high-revving 2-litre Clio 200 that we’re so fond of. Like nearly all of its rivals, it uses a 1.6-litre turbocharged petrol engine, producing 197bhp – the same as its predecessor – and 177lb ft – a figure delivered from 1750 to 5500rpm, a vast change from the outgoing 200’s 159lb ft at peak 5400rpm. It drives the front wheels via a six-speed twin-clutch gearbox, which can be manually controlled via steering column (rather than wheel) mounted paddles and boasts a launch control function. A traditional manual gearbox will not be available. The combination of new drivetrain and a 36kg weight loss (down to 1204kg) mean performance improves, with the 0-62mph time cut from 6.9 to 6.7sec, while the top speed is 2mph higher, at 143mph. There’s also a huge improvement in fuel economy and emissions, the 200 Turbo’s 44.8mpg and 144g/km a world away from its forebear’s 34.5mpg and 190g/km. While the 200 Turbo is based on the same bodyshell as the regular, five-door Clio, there’s a rear spoiler and diffuser and an ‘F1 blade’ front bumper as well as a host of changes under the skin. There’s a new steering calibration and the suspension is tauter, the rear anti-roll bar 60 per cent stiffer than the standard Clio, while 320mm front brake discs are as large as those on a Laguna V6. Motorsport-developed hydraulic compression stops in the shock absorbers – a production car first, according to Renault – are said to ensure decent ride comfort. An electronic ‘R.S. Diff’ attempts to avoid understeer before the stability control cuts in and saps power. As ever, a Cup chassis is optional, making the Clio 3mm lower and 15 per cent stiffer as well as bringing a quicker steering rack and 18in wheels shod in Dunlop Sport Maxx tyres.  ‘R.S. Drive’ is standard kit and allows the driver to alter between Normal, Sport and Race modes. These affect steering, driver aids, engine sound, throttle response and gearchange speeds, with Race keeping the twin-clutch ‘box in manual and killing all the stability and traction control. The Clio is set to cost around £19,000 when order books open in April, placing it near the top of the small hot hatch class, and at least £2000 higher than the new Ford Fiesta ST. Standard equipment is strong, though, including Bluetooth, touchscreen satnav, keyless go and front sports seats, while leather, Renaultsport Monitor telemetry and a reversing camera lie on the options list. Renaultsport will release a Clio warm hatch this year, too. Dubbed the GT, it uses an RS-tuned chassis but mated to a 1.2-litre turbo petrol engine with around 120bhp. Also using the six-speed twin-clutch transmission, it’s set to ape the 200 Turbo’s looks while undercutting it by around £2000.