The Renault Clio GT 120 debuts at the 2013 Geneva motor show, a warm hatch with Renaultsport genes 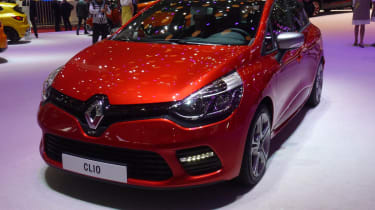 Renault has unveiled its new Clio GT at the 2013 Geneva motor show. Bridging the gap between the regular supermini and the Clio 200 Turbo hot hatchback, the GT gets Renaultsport chassis tuning mated to a more frugal drivetrain.

The front wheels are driven by a 1.2-litre TCE turbo petrol engine, which provides 118bhp and a 0-62mph time of under 9sec. Much like its bigger RS brother, the GT gets a six-speed ‘EDC’ twin-clutch gearbox as standard. A Renaultsport Drive button toggles between Normal and Sport modes for the throttle, steering and gearbox, just like in the 200, while the Renaultsport Monitor on-board telemetry system is also available.

Its styling is heavily inspired by the full-strength Renaultsport Clio too, with 17in alloy wheels, a rear spoiler, larger air intakes and twin exhaust pipes. Those unable to run a hot hatch will be impressed at how closely the GT – which is capable of a claimed 54.3mpg – apes the 200 Turbo, while buyers of the latter – a video of which is below – might be a little peeved at the resemblance…

Europe will get both hatchback and estate versions of the Renault Clio GT 120, but the UK will only see five-door models, which are expected to cost around £17,000, undercutting the RS 200 by about £2000.