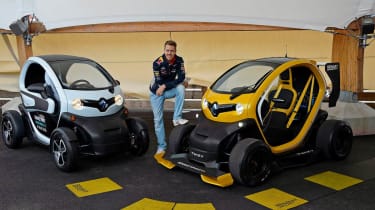 The Renault Twizy F1 has been revealed in Spain. The crackers concept boosts the electric car – normally capable of an exceedingly modest 17bhp – to 97bhp via a KERS system borrowed from Renault-engined F1 cars, such as Sebastian Vettel’s Red Bull. Weighing 564kg – little more than an Ariel Atom 3.5 – the Twizy F1 boasts the same power-to-weight ratio as the Renaultsport Megane 265 hot hatch, endowing it with a similar six-second 0-60 time.

And the first to sample its unlikely turn of pace was Vettel himself, switching his regular Sunday company car for something rather different. The wheels and steering wheel borrowed from a Formula Renault 3.5 should ensure he wasn’t completely out of his comfort zone, though…

Video of Sebastian Vettel driving the Renault Twizy F1 below