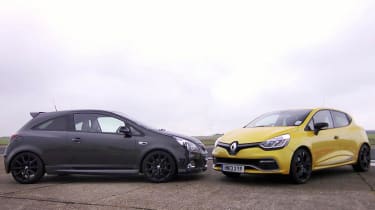 Renaultsport Clio battles Vauxhall Corsa VXR in our latest track battle. The two hot hatchbacks fight each other rather directly, with similar power and weight figures, but each employs different tech solutions to transfer its horsepower to the track.

The Renault Clio 200 Turbo has been with us for a year now, and you may be familiar with how we feel about it. After two decades of superlative hot Clios, the latest model has been a bit of a disappointment, an excellent chassis undermined by a slightly flat engine and an infuriating paddleshift gearbox.

But with its 1.6-litre turbo four producing 197bhp and 177lb ft, and the increased focus on late braking and perfect line taking its six-speed twin-clutch gearbox ought to allow, the RS badged car theoretically has a very good chance on track.

After months of a indifference, could our minds be about to be changed for the better by the £18,995 Clio? Its 6.7sec 0-60 time and 143mph top speed are improvements over its predecessor, which never failed to impress us on circuit.

An obstacle on the Clio’s path to glory is a new hot hatch rival in the shape of the Vauxhall Corsa VXR Clubsport. The Corsa hot hatch has been with us for a long time now, but as the current generation supermini heads for retirement, this run-out special edition looks to see it out on a high.

It’s the most powerful Corsa yet, with a 202bhp/184lb ft 1.6-litre turbo engine, while it gains the hardcore spec of the 2011 Corsa VXR Nurburgring, which means there’s a proper, motorsport-inspired mechanical limited-slip differential acting on the front axle to improve traction and ensure impressive drive out of corners.

The Corsa gets a good old-fashioned six-speed manual gearbox, while its performance figures just edge the Clio – 60mph arrives in 6.5sec, while the top speed is an identical 143mph. The Corsa falls down at the showroom, where – before discounts, at least – it costs a considerable chunk more than the Renault at £22,400.

So, which is quicker? And which will you enjoy most on a trackday? The video above reveals all…