Renault Clio 182 serves up lashings of entertainment. We help you to spot a good used one in the classifieds 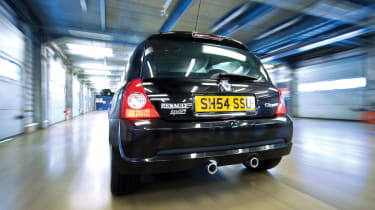 Many Clio 182s are maintained by enthusiastic specialists rather than main dealers nowadays. One such specialist is K-Tec Racing at Verwood, Dorset, which also develops and sells tuning parts for track and road use. K-Tec’s Sean Martin is our guide here

Engine It’s fundamentally a tough, long-lasting unit as long as it’s serviced regularly, with a vital cambelt change at 72,000 miles or six years. It’s a fiddly job because the engine’s belt-end is so close to the inner wing, so the engine mounts have to be loosened to let the engine shift enough to create clearance. 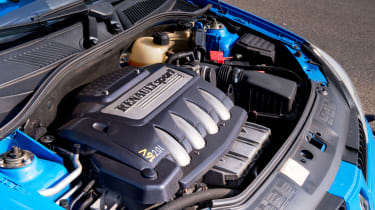 One regular problem is a rattling inlet-cam timing variator, heard when the engine is warm and idling. Replacement is the only cure, best done at the same time as the cambelt. That might also be the time to fix a leak from what looks like the cam cover but is actually also the top half of the camshaft carrier. ‘Renault uses a non-solidifying sealant,’ says Sean, ‘and the oil eats away at it. You have to take the camshafts out to fix it.

‘Another typical leak spot is from the power steering switch at the bottom of the front of the engine – a £50-£60 job to replace. Don’t worry about a lumpy idle, by the way – it’s normal.’ 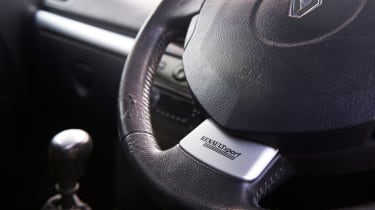 ‘If the second and third-gear synchros are worn, walk away because it’s had abuse,’ advises Sean. ‘But don’t worry if the gear lever moves around when you accelerate or decelerate. That’s normal, because the stabiliser mount is very weak. We sell a stronger kit with a Polyflex bush. There’s a very minor noise increase over a standard bush but it’s a significant improvement over a worn one.’

The clutch is self-adjusting, so a high biting point most likely means a new clutch is needed. 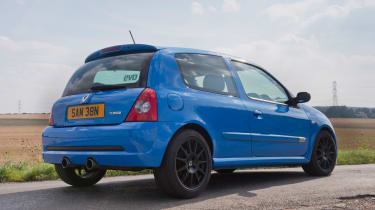 Cup cars have a wider front track with different hubs, wheel bearings and offset, although the lower wishbones are the same. All these components are durable – ‘We’ve done only three trackrod ends in four years,’ says Sean – and inexpensive.

The standard original-equipment dampers are also cheap, which is good news because they can lose their edge after as little as 24,000 miles. The special Sachs dampers on the Trophy are another matter: they are expensive and can suffer from corrosion of the piston rods but are otherwise durable and can be rebuilt. Their settings are locked at the factory but they can be unlocked when the dampers are refurbished, so they become adjustable.

The brakes should have a firm, almost race-car-like pedal. 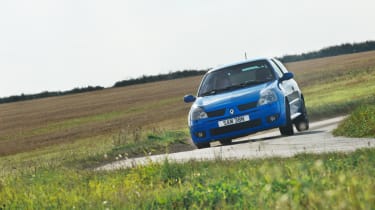 Any Clio 182 is too new to have developed obvious bodywork rust, although Sean has noticed occasional signs developing in the roof seam between the centre and rear pillars. Otherwise, past accident damage and subsequent poor repairs are the only real worry. Check that the finish of seams and joints is the same on both sides of the car. If they differ, then a panel might have been replaced and there’s potential for rust if the protection isn’t up to standard.

Parts Prices - (Supplied by K-Tec Racing, Verwood, Dorset. Tyre prices from Love Tyres. All prices include VAT at 20 per cent)

The cheapest unmolested Clio 182 we found, in black with both Cup packs (suspension and bodykit) and 113K on the clock, was advertised at a curious £2195. It was a tempting prospect but approach such an apparent bargain with an open mind and an HPI check. The mileage needn’t be a problem in itself but a thorough history would be reassuring.

Typically, the best Clio 182s fall between about £2500 and up to double that figure for a Trophy, which, in the long term, will be the one to hold its value the best.