Clio R.S.16 - Megane-engined hatch will not go into production 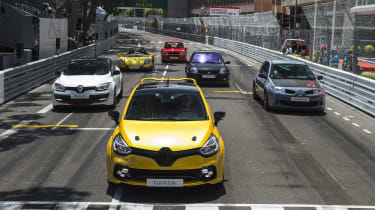 Renault Sport has said that it will not build its wild Clio R.S.16. The concept was unveiled the Monaco Grand Prix, and was Renault Sport’s 40th birthday present to itself. In essence, it’s a Renault Sport Clio furnished with the 271bhp engine and six-speed manual gearbox from the Megane 275 Trophy-R. But, the R.S.16 isn’t just a show car as the chassis has been heavily upgraded making it the fastest road car ever to wear the Renault Sport badge.

Sadly it will not go into production and will remain just one of Renault Sport’s engineering projects. Renault gave us this statement: ‘Clio R.S. is built at the Alpine Dieppe plant. Here it’s possible to make very low volume, hand built production cars (it’s where we made Clio V6, Spider and, currently, some competition cars – Clio Cup, Formula Renault etc). The plant is also gearing up for the production of the Alpine and, it’s due to the focus on this, that the eventual decision was made not to divert attention away to make some R.S.16s. The option of delaying R.S.16 until after the start-up of Alpine was considered but this would have meant first-half 2018, too long for customers to wait.’

We were very impressed with the R.S.16 when we drove it earlier in the year; we found it agile, engaging and remarkable fast. We’re disappointed to learn it won’t become a production car, but hope the Alpine will be worthy alternative.

>Click here to read our review of the Renault Sport R.S.16

We were given access to the development of the R.S.16 when Renault Sport had hoped to make it a limited production car. ‘We wanted to do another crazy car [like the Spider and Clio V6] to celebrate 40 years of Renault Sport,’ says managing director Patrice Ratti, ‘but we wanted to do something even faster and better than the Clio V6.

‘We arrived at the idea of taking a Clio R.S. and putting the Megane R.S. drivetrain in it. We toyed with the idea of putting the engine in the rear, like the Clio V6, but it would be very heavy. We’re better at front-engined, front-wheel drive cars at Renault Sport anyway.’

The project was born towards the end of last year, which means the R.S.16’s gestation has been just a few months. ‘We started thinking about the car in October,’ says Ratti, ‘and in November we did a packaging study. We saw it was possible to put the big engine from the Megane into the Clio and at the end of November we got the ahead from Renault.’ 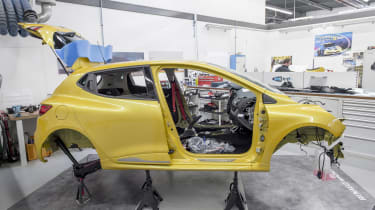 A small team of engineers from Renault Sport’s road and competition divisions, plus a designer, was committed to the project once it had been green lighted. ‘It seems easy to take the engine from one car and put it in another,’ says motorsport engineer Christophe Chapelain, ‘but the [dimensions] of the Megane’s engine and gearbox are very different to the Clio’s. To adapt that we needed some interface pieces and because the engine has more torque we needed brackets on the top and the bottom, too. We designed a new part on the top and for the bottom we adapted the subframe from the Renault Kangoo. On the racing side this is easy to do, but when you start working with the road car guys – when you need to make it fit on the production line – it gets complicated.’

The 275 Trophy-R’s drivetrain has been slotted in wholesale, so the six-speed manual gearbox and limited slip differential remain. The bigger engine is heavier than the standard Renault Sport Clio’s 1.6-litre, but the gearbox is lighter than the Clio’s DCT transmission so the drivetrains are broadly the same weight. The exhaust, meanwhile, is by Akrapovic.

With 271bhp and 266lb ft of torque the Clio R.S.16 is a fearsomely rapid hot hatch and with less weight to carry than the bigger 275 Trophy-R it becomes the quickest Renault Sport road car to date. Its power to weight ratio of 224bhp/tonne is also the highest of any Renault Sport road model.

The second major challenge the engineers faced was the chassis, which would require significant modifications to cope with the power output. Renault Sport fitted ‘PerfoHub’ double kingpin struts to the front axle, borrowed from the much-loved Clio III R.S, so that it could handle the 2-litre engine’s turbocharged torque. The lower suspension arm was also lifted from the previous Clio. A bespoke part was constructed to marry the struts to the 275 Trophy-R’s hubs, which enabled the engineers to fit that car’s high performance brakes.

The rear beam, meanwhile, is the heavily reinforced item from the Clio R3T rally car, which meets the lateral and camber stiffness requirements. The front and rear track widths have been increased by 60mm and the one-way adjustable dampers are the Ohlins items from the 275 Trophy-R. The 19-inch wheels are Speedline Turini items while the tyres are track-focused Michelin Pilot Sport Cup 2s, both also lifted from the 275 Trophy-R.

The third major challenge and the biggest job of the entire project, reckons Ratti, was persuading the Megane’s drivetrain electronics to communicate with the Clio’s chassis electronics, such as the ABS and ESP systems. The solution was to incorporate software from the Sandero into the engine ECU, which interfaces with the Clio’s software.

The bigger wheels and wider tracks, plus the wheel arch extensions, contribute to a much more aggressive stance, while the rear wing – borrowed from the Clio Cup racing car – actually reduces lift at speed by 40kg. Inside, the R.S.16 uses the same bucket seats and six-point harnesses as the 275 Trophy-R, although there’s no roll cage. The air conditioning has been removed to save weight, which helps to keep the car down to 1200kg.

To date two R.S.16s have been built; a Liquid Yellow machine is the show car and a Deep Black example is the test and development mule. The Clio R.S.16 made its UK debut at the Goodwood Festival of Speed on 24-26 June.