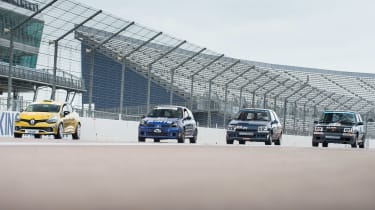 Bov is drawn to the boxy Turbo, while Wallace picks the Phase 1 Clio Cup (based on the pre-Williams 16v). This leaves Franchitti with the feisty 1999 Cup, complete with push-pull sequential transmission and a gloriously revvy naturally aspirated 2-litre motor.

Qualifying is restricted to a handful of laps (OK, maybe a few more for me, but I had slicks to try to get warm...) and proves to be a voyage of discovery for all of us, not least finding out how scary banked corners can be in front-wheel-drive cars on cold tyres. Wallace (winner of the Daytona 24 Hours in a Group C Jaguar, don’t forget) confesses to ‘a few heart-in-mouth moments’ and a close shave with the concrete wall. I’m the only one running slicks, which is my early excuse for taking a few laps to build-up to going through Turn 1 flat-out. It’s a rush, but never less than scary. How Tony Kanaan averaged 215mph around Rockingham’s fearsome Oval in 2001 I have no idea.

Having recorded our best times (1:47.8 for JB, 1:45.8 for AW, 1:39.4 for MF and 1:33.2 for me), or at least our best efforts at sandbagging (ahem, Mr Franchitti), editor Nick Trott calculates our handicap for the three-lap race – essentially three times our one-lap advantage, minus a bit of a fudge factor to allow for the standing start. The upshot is Bov starts first, roaring away in the boosty, deep-voiced GT Turbo. After a six-second gap, Wallace yelps the original Clio Cup off the line, followed by Franchitti 20-odd seconds later in his Clio. That leaves me twiddling my thumbs for another 20 seconds or so. It’s so long that the others are out of sight and my slicks are now stone cold…

For the first lap it feels like an utterly fruitless chase. It also feels as if I’m going to crash at every turn, the faster the corner the greater the Pucker Factor, until finally talent yields to chilly rear-tyre temp and I have the mother-and-father of slides through Chapman Curve. By the time I stop laughing (I have a tendency to do this during and after a near-miss) Franchitti & co are even further down the road. 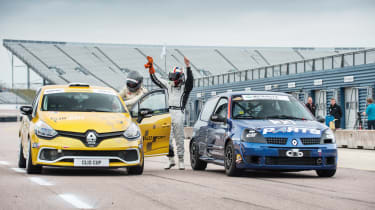 For two lonely laps I’m convinced the handicap was way too severe, but then I see the three stooges going all NASCAR into Turn 1. Poor old Jethro gets hustled up into the dirty margin of the banking and the gnarly old pros slide beneath him. It still seems like I’m set for dead last, but Bov’s scare has lost him momentum, and with my slicks sweetly up to temperature I’m soon past him and have Wallace in my sights. AW spots me in his mirrors, but before he has a chance to act upon what’s so clearly in his mind (don’t play poker, Andy!) I manage to mug him, too, and continue the chase to Franchitti.

Marino is clearly going to be a tougher nut to crack. If he hadn’t sandbagged quite so blatantly (sorry, ‘found a lot of time between my first and second drives of the car’) I’d have had another half-lap to pick him off, but as it stands I’ve got just a handful of corners to try to get by. Cue some distinctly BTCC-inspired grassy cuts, accompanied by some increasingly powerful urges to nudge him into a spin.

The hairpin offers my best hope. He blocks me mercilessly under braking, but I’m hoping I can out-sprint him towards the tight chicane that feeds us out onto the start/finish straight. I’m right on his tail, but the older Clio has great traction and just enough grunt to hold me off. It would be so easy to offer him a helping bumper, but apparently that’s not allowed, so it’s the same story as we nail it towards the chequered flag. I was robbed, etc.

Motor-racing might be all about the winning, not the taking part, but this has been a hoot. To see and experience so many generations of Renault one-make racers going at it – possibly a little harder than Renault and the generous owner of the ’99 Clio Cup might have expected – has been truly unique. As cars to drive for fun, they’re hard to beat. As cars to showcase your talent and pursue your dreams of becoming British Touring Car Champion – just as Colin Turkington and Andrew Jordan have done in recent years – they’re second to none. Renault, we salute you!