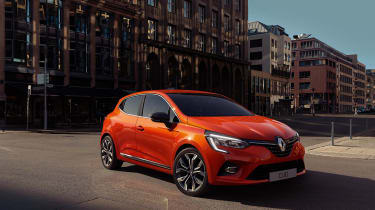 Renault has revealed its all-new Clio in full before its public debut next month at the Geneva motor show. After yesterday’s reveal of its revolutionary new interior, the exterior has clearly taken a more evolutionary approach, sharing a very similar aesthetic to the outgoing model.

It’s smaller than the previous-generation Clio, sitting 30mm lower and 14mm shorter on the road, and grafts on some of Renault’s latest design cues, such as the C-shaped LED running lights at the front and massive logo framed within a slim grille. Renault’s head of design Laurens van der Acker noted: ‘The exterior design of Clio IV won over our customers and continues to do so today, so we chose to keep that DNA while bringing modernity and elegance to the new model.’ Being one of the highest-selling models in Europe, Renault clearly didn’t want to take too many risks with a bold exterior redesign.

As mentioned yesterday, the new Clio is the marque’s first model to be built on the new CMF-B platform that will spread throughout the range. Like fellow French car maker PSA, this platform has been engineered to support both internal combustion and electrified powertrains, and implement generous upgrades to the electronic architecture. 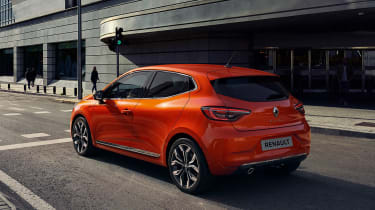 The new Clio will not be available with a totally electric powertrain though, as Renault has made the decision to instead keep it’s ‘Z.E’ EV range distinct from its traditional models like the Clio. The new Clio instead will use a suite of new electrified E-Tech petrol and diesel engines, with varying degrees of hybrid assistance.

Renault has focused on the new Clio’s aerodynamics in this latest iteration, adding touches around the front wheelarches and rear screen to clean up the airflow and reduce drag. The new Clio also comes as standard with full-LED headlights, a first in the supermini class.

The Clio’s all-new interior is much more of a revolution, now being designed around a 9.2-inch portrait infotainment display. Of more interest to us though is Renault’s work on improving the Clio’s ergonomics, raising the transmission lever on the centre console and lowering the seats to create a more dynamic seating position. 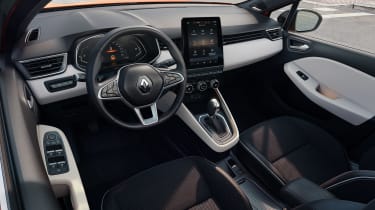 Renault has also replaced the previous car’s mixed analogue and digital instrument display with a single TFT screen, which is available in two sizes – 7.2-inch and 10-inch – depending on specification. The latter integrates extra information such as navigation data.

If you’re trawling through this article hoping to find details on the new Renault Sport Clio though you might be disappointed, as aside from a sportier RS-line trim level, the new Clio is not yet confirmed for this generation. Why? A combination of flat sales of the previous Clio RS and the market’s move away from supermini hot hatchbacks might well call time on the iconic Clio RS. This is quite a change from a decade ago, when Renault Sport ruled the class with its spectacular Clio 200 Cup, but the small French hot hatch is not lost, as Peugeot has confirmed the next 208 will be available as a GTi, with a hot electric model coming alongside, too.