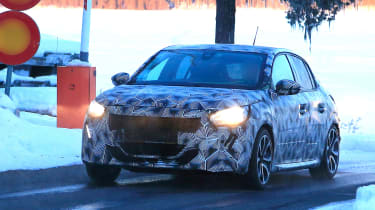 Peugeot has been spotted putting its final touches on the all-new 208 supermini before its imminent reveal at this year’s Geneva motor show. The French maker has been on a roll with its recent models, combining impressive dynamics, interesting interiors and suave exterior design, under the watchful eye of chief designer Gilles Vidal. Our expectations are high for the all-new supermini.

Looking at this prototype vehicle, it looks like Vidal’s design team haven’t held back either, with the body dominated by an extremely wide and deep grille section flanked by a pair of headlights pushed right out to the edges of the bodywork. Look closely and you’ll see the tell-tale signs of the 508’s fang-like daytime running lights, but the test car’s units don’t reveal whether the fangs will light up in their entirety as they do in some 508 models.

Under the new, more angular skin will sit an all-new modular platform dubbed CMP that will also underpin the next Vauxhall Corsa and a swathe of other small PSA models . It’ll also support full-EV powertrains, of which the 208 is expected to offer soon after release. There is also set to be a welcome return of the 208 GTi, and with the last Peugeot Sport model being one of the best pocket rockets out there expectations will be high. As previously reported, there is even rumors of an all-electric GTi variant eventually joining the range.

Inside, expect further application of Peugeot’s i-Cockpit interior ideology combining a high-set dial pack and shrunken steering wheel. Quality on all Peugeot interiors have been generally impressive of late, and we’re expecting little different this time around.

The 208 represented a colossal leap over its clumsy predecessor, the 207, in dropping weight, sharpening up the styling and tightening up the driving experience without compromising on general refinement or comfort. This time around, expect a focus on technology to go with its move to electrification, in what might end up being the Ford Fiesta’s gallic nightmare. There’s no news on when the new car will be UK showrooms, but before the end of the year is likely.