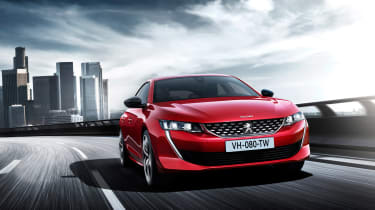 Peugeot has lifted the curtain on its all-new 508, a D-segment family saloon tasked to not only compete with rivals like the Volkswagen Passat, Ford Mondeo and Vauxhall Insignia, but also to fight the shrinking popularity of large mainstream saloons in the face of growing competition from trendy SUVs and compact executive 4-doors.

Despite the pressure on the market sector where it sits, the 508 is still a crucial model for the French marque so the all-new car has undergone a complete overhaul, moving off the current FP3 platform and onto PSA’s modular EMP2 base, which is quickly spreading across the group. As a result of the new platform, the new 508 will not be able to take six-cylinder engine options like before, although the ability to support hybrid drivetrains is a plus.

At launch six engines will be available, spread between petrol and diesel. The most powerful is a 222bhp 1.6-litre turbo petrol, a similar unit to the one in the excellent Peugeot 208 GTI by PS. A plug-in hybrid will arrive in late 2019 too.

> Click here for our review of the Vauxhall Insignia GSi

As with the platform, the exterior design is definitely a revolution rather than an evolution. Following on from the distinctive 3008 and 5008 SUVs, the new 508 matches the elegant details and muscular surfacing of those cars. Other touches like frameless doors and those concept car-like taillights also help it look more distinctive against conservative rivals. 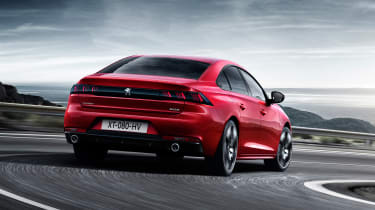 Contrary to the mainstream badge, Peugeot has continued its premium push with the new 508, an objective made clear in the elegant interior. Also like the 3008, the new 508’s cabin is more interesting than those of rivals, taking aim at cars like the Audi A4 and making the straight-laced Volkswagen Passat seem positively dull by comparison. Highlights include Peugeot’s i-Cockpit digital instrument set up, sleek piano key switches that sit below the large infotainment screen and an interesting use of materials on the dash, doors and seats.

The 508 may sit in a relatively uncool market segment, but Peugeot has history here and the new 508 is hoping to re-kindle some of the goodwill generated by its predecessors. Before the current, dull 508 and the prodigiously snouted 407 before that, was the Peugeot 406, a sleek saloon that gave rise to a Pininfarina-designed Coupe and proved perfect proportions and classy detailing were not just the preserve of premium brands. Dig further into the 508’s past and you’ll end up at the unbreakable 504, an iconic saloon that the new Peugeot 508 pays homage to with the 508 badging on the nose.

Due to go on sale in summer this year, the Peugeot 508 will also have an estate version which Peugeot will reveal later in 2018.