It's another limited-run Renaultsport Clio 200. The Raider gets bigger wheels, matt paint and lots of extra kit 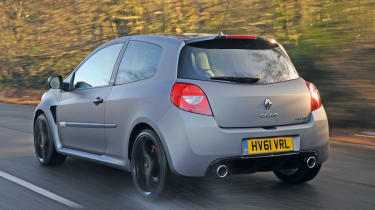 What is it? The Renaultsport Clio 200 Raider. It’s another special edition of the fastest Clio, and in the same vein as the Silverstone GP of 2011, there’s an options list plundering and a steep-looking price tag. At £21,695, it’s the first £20K-plus Clio since the mad V6. Just 50 come to the UK. Technical highlights?

For the first time since the Clio 200’s 2009 launch, there’s a dynamic change, albeit a small one. The standard car’s 17in, Continental-equipped alloys are swapped for 18in wheels with Bridgestone rubber.

Otherwise, it’s business as usual. With every option box ticked (including the sharper Cup chassis), the only choice you have to make spec-wise is whether to have an integrated TomTom or Renaultsport Monitor, and the 0-62mph timing, lap stopwatch and G-meter fun it brings. The dashboard can only accommodate one, and if there’s a chance you’ll venture on track, pick the monitor – you can always sucker a sat-nav to your windscreen when you need one… What’s it like to drive? The slightly larger tyre footprint brings a bit more grip and some extra weight for the still-direct steering. And while the ride remains firm but excellently damped, any potholes or ruts you do encounter will be communicated with a bit more vigour, smaller tyre sidewalls the likely culprit. None of these slight changes begin to alter the Clio’s character, though, and it remains the best hot hatchback and one of the most value-for-money performance cars on sale. Its naturally aspirated 2-litre engine relishes being revved (good job, as that’s where all the power is) and its chassis is unfailingly communicative and always exploitable. When it comes to fun, no fast hatch has touched the Clio 200 in its three years on sale. And until it makes way for a 1.6-litre, turbocharged replacement at the end of the year, we doubt anything will. How does it compare? The £22,295 Vauxhall Corsa VXR Nurburgring offers similar performance and special-ness to the Clio, if not its outright agility. The toughest foe for the Raider is probably the standard Clio 200 Cup, though, which is nearly five grand less at £16,930. You can also pick up 2009-vintage 200s for half the Raider’s asking price. Anything else I need to know? Leather Recaro sports seats are among the standard kit, as is a matt colour scheme. It’s not a wrap, but a proper, jetwash-unfriendly paintjob, Stealth Grey and Diavolo Red your two options.