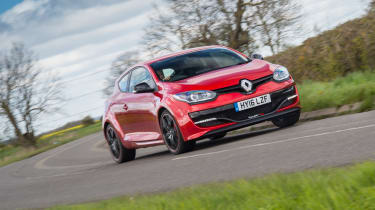 With all the furore surrounding the Focus RS, it’s easy to forget Renault is still building an RS Mégane. A class leader from the year it was launched, the Renaultsport Mégane might now be in its dotage, but on the evidence of the new (kind of) 275 Cup-S, there’s plenty of fight left in it.

Apart from its name, there’s nothing especially fresh about the Cup-S. Indeed, it’s effectively a shortcut spec for those who know they’re on the hardcore spectrum of hot hatches. To this end, it gets the track-ready Cup chassis as standard, rather than the more compliant (but still sharp) Sport chassis, as fitted to the plusher, road-focused Nav 275.

You know the RS recipe by now: the still-handsome, wedge-shaped, three-door Mégane, powered by an outgunned-in-2016 but supremely effective 271bhp four-cylinder turbo engine driving the front wheels of a chassis honed to an edge to rival that of a samurai’s katana. Inevitably our test car has a generous array of performance-enhancing options, but to be fair I’m pretty sure most people who order a Cup-S will also go for the titanium Akrapovic exhaust (£2500) and a wheel/tyre upgrade to the 19-inch Speedline alloys and Bridgestone Potenza RE050A tyres (£1000). 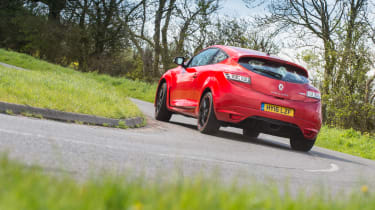 If they saw this test car in bright sunshine, they might also be tempted to spend a further £625 on the lava-hot Flame Red paintwork. I’d probably stick with a more sober hue and put the cash towards the £2000 Öhlins suspension option, but that’s me.

The motor isn’t a screamer (the red line is at 6800rpm), but it has a broad spread of torque – the 265lb ft peak is available at 3000-5000rpm – so you’re rarely caught in the wrong gear. With foot pinned to the floor, the Cup-S does feel a league below the Focus RS for outright grunt, but the Mégane has always been more about the punctuation points between the straights. Besides, I’m inclined to think 158mph and a sub-6.0sec dash to 62mph is ample.

Well, it’s certainly uncompromising. From the moment you get moving you can feel how sharp, direct and connected it feels. The steering has a steely response and consistent weight that’s perfectly attuned to its rate of response and the amount of grip available from the tyres. Comfort isn’t a priority, but the Cup-S is an entirely habitable car over long distances. If you’re okay with having your wobbly bits agitated over road imperfections, you’ll be happy with the trade-off, for the upside is an immersive, addictive, pin-sharp drive that gets to the heart of great hot-hatch dynamics. It doesn’t have ‘Drift Mode’, but it does have a three-stage ESC, so you have the freedom to back yourself through a hedge a 60mph if you so wish. I like that in a car.

The engine feels up for it at all times, but you need to engage Sport mode to bump it from 247bhp to the full 271bhp. There’s a hint of torque-steer – as you’d expect from a front-drive car with a mechanical limited-slip diff – but it’s nothing to worry about, and certainly not enough to distract you. There’s tons of traction, so you can put down all the power, and the six-speed gearbox is sweet and swift in shift action. 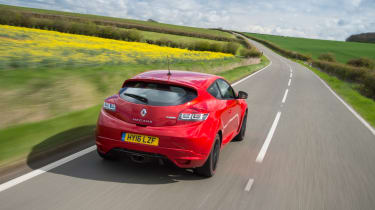 As this test car is running on regular Cup suspension and not the optional Öhlins Road & Track kit previously offered as an option on the Trophy, it also does without Michelin’s Pilot Sport Cup 2 tyres. That’s not a disaster, for as we’ve said before, the Potenza is actually the nicer tyre for road use, being less temperature-sensitive, offering a fraction more compliance and providing a clearer sense of connection to the road at sane speeds. On road or track, the Brembo brakes have excellent feel, performance and stamina.

Yes, the RS Mégane is a bit long in the tooth, and no, it’s not a bargain once you’ve added the options you’re absolutely going to want to fit. But if you’re serious about your driving and want a hot hatch with pedigree, the Cup-S delivers the goods in every way that really matters. It’s a class act. 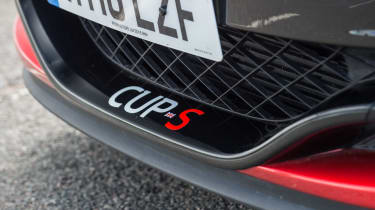 The Megane 275 Cup-S comes up against a pretty serious amount of competition. Choice includes the hugely sorted Ford Focus RS, or alternatively a Golf R. Then there's the Honda Civic Type-R, which is closer to the Megane in its more uncompromising approach to a hot hatch.

Given its age, the Megane's £23,935 is fairly steep, but then the car you get is still an utterly fantastic thing to drive. Options aren't cheap, but the £2000 Öhlins suspension in particular is worth the investment.