The hardcore halo of the Renault Mégane RS line-up is being put through its paces at the Nürburgring before its full reveal. 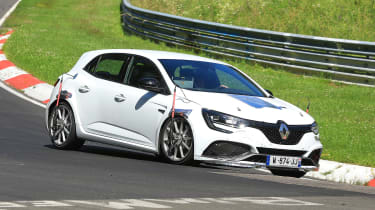 Our spy photographers have captured images of the forthcoming Renault Mégane RS Trophy undergoing performance testing at the Nürburgring. Due later in the year, the hardcore model is expected to build on the stiffer Cup chassis and benefit from a suite of upgrades, just like previous Renault Sport Trophy variants.

Looking at the images there’s not much to distinguish the white test car from the current – standard and Cup – Mégane RS models, although it does appear to ride slightly lower, with a set of multi-spoke wheels (not available with the current line-up) tucked-up tighter in the wheelarches. The lack of a disguise suggests Renault may have some exterior touches to come at a later date to emphasise the model’s hardcore nature.

Details regarding the powertrain are currently thin on the ground, but we do know the Trophy will boast 296bhp. How the extra 20bhp will be liberated from the turbocharged 1.8-litre four-pot remains to be seen. However, if the Mégane 275 Trophy is anything to go by, there’s every chance the power hike will come courtesy of a remap and a freer-flowing exhaust system.

In the harder R guise the last Mégane Trophy was suspended by a combination of adjustable Öhlins dampers and Allevard composite springs – a package offered as an option on the non-R Trophy derivative. Also, it’s likely the new Trophy will come complete with the Cup’s cast iron and aluminium composite front brake disc set-up.

Set to crown the Mégane RS range, the Trophy is expected to be unveiled later this year. Hopefully, it will lay the groundwork for an even harder and more focused Trophy-R version to follow. 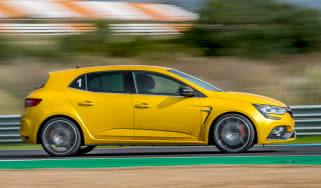 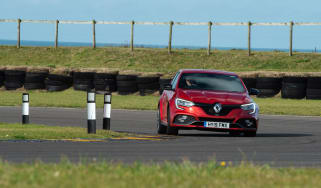