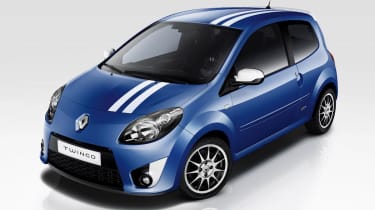 Renault has revealed a new Gordini hot hatchback, one that offers a cheaper route into the reborn brand.  The first Gordini without a Renaultsport badge, the Twingo Gordini 100 uses the same 1.2-litre turbocharged engine as the Renault Twingo GT, which it replaces. This offers up 100bhp @ 5500rpm and 112lb ft @ 3500rpm.  So while it possesses three quarters the power of its quicker Twingo Gordini 133 sibling, it has barely less torque, and delivers it lower in the rev range. Top speed is 117mph and 0-62mph takes 9.8sec, while fuel economy and CO2 emissions measure in at 50mpg and 132g/km. Recreating Gordini hatches has been hugely successful for Renault, especially amongst young and female drivers. Two thirds of Renaultsport Twingo 133 sales and one third of Renaultsport Clio 200 sales are now Gordini versions. Like the rest of the Gordini range, there’s a host of interior and exterior flourishes, themed in white and blue. And while you can specify your car in black or white, 90 per cent of current buyers go blue and just one per cent opt out of the twin body stripes. Order books are open now, with deliveries in January 2011. With the upcoming 20 per cent VAT rate, it costs £11,395. That compares to the outgoing £10,695 Twingo GT and £14,500 Twingo Gordini 133, though those prices are at the lesser, 17.5 per cent tax rate.

Read our review of the Renault Twingo Gordini 133 here

Read our review of the Renault Clio Gordini 200 here