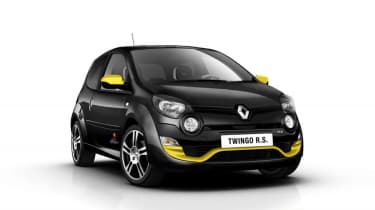 Following from the Clio Red Bull RB7 edition, Renault has released details of its new Red Bull inspired Twingo – the RS Red Bull Racing RB7. It has been built to celebrate the 2011 constructors championship win, in the Renault-powered RB7.

Other than a good amount of standard equipment and Cup chassis, changes to the Red Bull RB7 edition are purely cosmetic. It starts with the pearlescent Black paint and contrasting Sirius Yellow mirrors and spoilers, and a chequered roof pattern.

Like the Clio, Renault won’t be selling the Red Bull Twingo in the UK - sales will be limited to Germany, Austria, France, Belgium/Luxemburg, Japan, Hungary, Czech Republic, Slovakia, Poland and Switzerland.