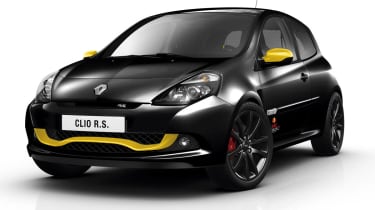 The Renaultsport Clio 200 won’t die quietly. With an all-new turbocharged hot Clio coming at the end of the year, there’s a plethora of special editions to help send the current, naturally aspirated car out in style. The latest is this, the Red Bull Racing RB7. It celebrates the use of Renault engines in 2011’s world championship winning Formula 1 car.

Just like the recent Raider edition (titled Ange & Demon in Europe, and driven here), the Clio 200’s standard 17in alloys are upgraded to 18in items wrapped in Bridgestone RE050A tyres, representing the biggest dynamic change over the regular car. Its 197bhp (200hp) and 159lb ft 2.0-litre petrol engine remains, with its rev-hungry power delivery and 6.9sec sprint to 62mph.

Changes for the Clio Red Bull Racing RB7 are otherwise cosmetic; the body colour is black while the front blade, side mirrors and rear diffuser are painted yellow, there’s a chequered flag decal for the roof and the doors get Red Bull badges.

Inside there’s an abundance of standard equipment – Renaultsport’s cracking yellow fabric Recaros, climate control and RS Monitor, which logs performance data such as 0-62mph and lap times – as well as the obligatory special edition numbered plaque.

The Clio is the first in a Red Bull Racing special edition range, which will go onto include Renaultsport’s Twingo and Megane. It won’t make it to the UK, though; sales will be limited to Spain, Switzerland, Belgium, Austria and France. Sales begin this week in the latter, with prices starting at 27,900 euros – the equivalent of around £23,400, making this the most expensive road-going Clio 200 yet.

Renault has also seen fit to deck out its fast Megane in the colours of the Formula 1 teams its engine powers (pictures, right). The liveries of Red Bull Racing, Lotus F1 Team, Caterham F1 Team and Williams F1 Team are all applied to the firm’s hottest hatch, though seemingly for PR purposes only.