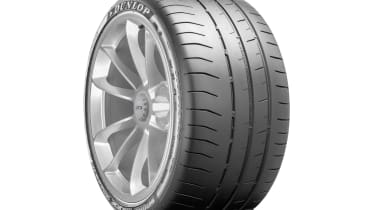 Think of recent GT Porsches and their tyres and Michelin comes to mind but Dunlop entered the frame on the previous generation GT3 and has now launched a successor for the latest 991 911 GT3 Gen-2.

The Sport Maxx Race 2 has been developed closely with Porsche’s Motorsport Road Car Performance division and in parallel with Michelin’s OE alternative. The co-operation means the tyres and car can be developed together to extract the best performance balance between road and track.

The brief for the successor to the Sport Maxx Race was to improve dry grip and lap times plus steering response. This has been done by using a compound derived from Dunlop’s motorsport programme plus a casing with a hybrid top layer containing aramid that maximises the contact patch throughout the speed range and while cornering. It also evens out the pressure and reduces hot spots. See the pressure footprint of the tyre alongside that of  a Sport Maxx race slick and they are very similar apart from the road version’s water shifting longitudinal grooves.

The outer one of those grooves on this asymmetric tyre has bridges spaced along its length filing the gap between the huge outer blocks and the inner tread. These reduce distortion of blocks and groove sharpening the steering.

So does it work? We got two short sessions around Goodyear’s swooping dry handling track in Mireval, France to find out in manual and PDK-equipped cars. The PDK machine driven second revealed most about the tyre as we got more familiar with car and circuit. Steering is direct but not so sharp that it needs constant correction. At higher speeds the GT3 feels planted taking a couple of full throttle curves with ease and following the steering faithfully. Accelerating hard out of tight turns there’s no hint of the tail stepping out. Traction was particularly impressive and the only time the rear moved was when we made off throttle corrections after small mistakes. In tighter turns there was some understeer, particularly if you got greedy with the entry speed, but it was easily tamed by opening the steering and easing the throttle. Impressive stuff particularly as the new tyre gave the confidence to approach the limit within such a short time.

A 265/30R20 and 325/30R21 are planned for release later this year and six more sizes in 2018 for other marques in the fast growing sector Dunlop has dubbed UUHP – ultra ultra high performance.