There's a really good car under there... 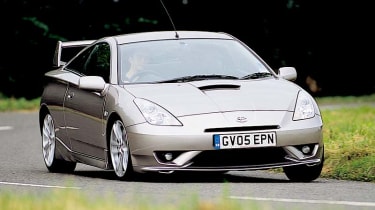 The GT kind of passed us by when it was launched in the summer, which is pretty remarkable given its, er, arresting looks. It's based on the Celica T-Sport, which means it gets the top-spec VVT-i (variable valve timing with lift) 1.8-litre screamer that also does service in various Lotuses, a close-ratio six-speed 'box, front-wheel drive and Toyota's latest stability control (VSC) and traction control (TRC) systems. You also get different springs, which lower the ride height by 30mm, plus unique 17in alloys wearing asymmetric Pirelli PZeros. Oh yes, and that bodykit.

The rear aerofoil has a whiff of functionality about it, but there's really no excuse for those sill-skirts. Obviously these things are subjective, but it's unlikely to appeal to anyone who doesn't subscribe to Max Power incorporating Big'n'Bouncy. And isn't the point of the 'maxing' culture that you customise your car to express your individuality (even though, ironically, they all end up conforming to exactly the same aesthetic)? In which case a new set of skirts and spoilers would be top of your shopping list anyway...

Quick, jump inside. That's better. The GT's leather and Alcantara seats are excellent and the controls well placed (the pedals, for example, are so well matched for heeling and toeing that you're soon doing it almost subconsciously) and everywhere there's a slick precision to the way the Celica does its stuff. Actually, I'd forgotten just what a brilliant chassis this is, and in the GT it feels sharper than ever. There's a wonderfully alert, living feel to it, and as you slice into corners you can feel the suspension working, bobbling around, not in an unsettling way but in a busy, involving fashion. Any electronic interventions are discreet, messages stream back from all four corners, and you feel right there, nice and low, at the centre of it all.

The engine, as ever, is a mixed blessing. The way it whips from 6500 to the 8000rpm red line is a hoot, but below six-five there's really very little there, and unless you take it literally into the red, each upchange drops you back out of 'the zone'. Like the looks, it's definitely not for everyone, and together they deny the Celica the wider audience that its chassis deserves. Which is a shame, because in a few months' time the Celica will have ceased to be, perhaps destined to be a 'nearly' car. So if you don't mind the way it looks, grab one while you still can - just remember to tick the 'thick skin' option.