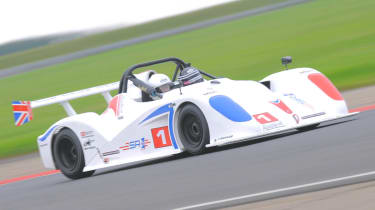 What is it? The Radical SR1, the entry point into the Peterborough-based manufacturer’s range of racers and track cars. It’s priced from £29,830 (plus tax) purely as a toy, but stump up £37,500 (plus tax) and you’ll get the car, entry into the eight UK rounds of the Radical SR1 Cup race series, your race licence and training, a racesuit, several trackdays to get to grips with your SR1, and manufacturer support during race weekends. It’s one of the cheapest ways to compete in a real race-spec car. Technical highlights? The race series has been designed for novices with no more than six races to their name. And the car’s basic spec (by Radical standards, at least) reflects that. Power comes from a 185bhp 1.3-litre four-cylinder engine, which has been sourced from a Suzuki motorcycle. It drives the rear wheels through a six-speed sequential gearbox, which uses a lever rather than steering-wheel paddles. Weighing just 480kg, the little SR1 trumps the power-to-weight ratio of many supercars, not least a Ferrari 599.  What’s it like to drive? It’s hardcore compared to even Caterhams and Ariel Atoms, but that doesn’t stop it being surprisingly simple to drive. It’ll suit its beginner audience perfectly – the frantic, slightly dizzying pace of Radical’s more muscly cars is missing, but its 3.6sec 0-60mph time tells you it’s still far from slow. It’s the evenly delivered power (no nerve-shredding spikes in its power delivery like some racecars) and road-spec tyres that make it possible to get in and start majorly building speed after just a couple of laps. The SR1’s lack of understeer and lightning-fast responses compared to other track toys instill a lot of confidence. Most tricky to get used to is its gearbox; there’s a clutch pedal to get you out of the pits, after which you can change gear clutchlessly, with just a light throttle lift required. It might go against instinct for most beginners, but the tuition and trackdays that are part of Radical’s sizeable race package should help smooth out any discomfort. How does it compare? The car alone competes with Caterham Superlights (priced from £27,995 for a 175bhp R300) and the Ginetta G40R (175bhp, £29,950). The Radical is way more focused than both, but unlike those cars it isn’t road-legal. Racing-wise, a season in the Caterham Academy starts from £20,495, but you’ll be driving a basic 125bhp Seven, while a season in a G40 costs from £18,000, but you won’t own a car at the end of it. Anything else I need to know? Finish the SR1 Cup season and the car will be yours, but you’ll be too experienced to re-enter the next year. Instead, a £5000 upgrade will make your car eligible for the 2014 Radical Clubman Championship. If you don’t fancy that, predicted values for a season-old SR1 top £20,000.