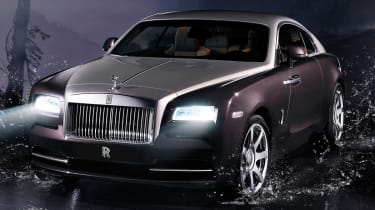 Rolls-Royce has finally pulled the wraps off its Wraith coupe, after a series of teaser images leading up to today’s 2013 Geneva motor show unveiling.

It’s the most powerful Rolls-Royce ever made, taking the 563bhp of the 6.6-litre V12 Ghost it’s based on up to 624bhp, more than a McLaren MP4-12C. Even more impressive is the peak torque figure, with 590lb ft available from a meagre 1500rpm right up to 5500rpm. That helps whisk the Wraith to 60mph in an Audi R8-like 4.4sec, despite the fact it weighs a portly 800kg more, at 2360kg unladen. Top speed is electronically limited to 155mph.

Rolls-Royce is pitching this is its most dynamic ever model, with a 24mm wider track, 183mm shorter wheelbase, appropriate spring and damper settings and more direct steering compared to its saloon compatriot, the Ghost. There’s also a plethora of technology under the skin, including Satellite Aided Transmission, a system which sees the eight-speed ZF automatic gearbox base its up and downshifts on GPS information about the road ahead, combined with data it translates from the driver’s behaviour. It’s technology developed by BMW that could be in the mainstream in a few years, but which is currently reserved for high-end cars like the Wraith.

The Wraith uses a steel monocoque body, and has the rear-hinged doors now traditional on modern Rolls-Royces. And while it’s recognisably Ghost-derived, the Wraith has a more assertive look, with a sweeping fastback look and a 50mm height reduction. A two-tone colour scheme is standard.