276bhp Swede nods to the past, but is it a return to former glories? 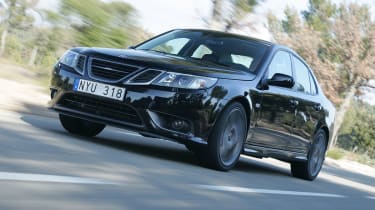 I want to like this car. Saab is a bit like Alfa Romeo in the way the embers of goodwill still glow even when the marque’s custodian turns out another point-missing duffer.

Not so long ago, Saab-owner General Motors, in its US-centric way, did its best to subsume Saab into the alien GM culture. The brand ceased to have any meaning beyond some design themes and desperate attempts at Scandinavian and aircraft references. Now, though, Saab is allowed to be GM’s centre of expertise for turbocharging and clever four-wheel-drive systems, and it has its own Swedish design centre again.

And there’s this 9-3 Turbo X. It’s meant to evoke images of Saab Turbos past. They were often painted black, so the Turbo X comes only in metallic black. It also features a turbocharger boost gauge just like the original 900 Turbo’s. The 500 Turbo Xs coming to the UK will also introduce us to the most sophisticated version of Saab’s Cross-Wheel Drive, or XWD.

This uses a Haldex multiplate clutch to divert torque from the front to the rear wheels as required – up to 100 per cent of it in the theoretical condition of a totally gripless front end. The novel part of this particular system is that it pre-empts each end’s torque needs instead of waiting for the front wheels to spin. For example, it sets itself to a rearward bias at rest so you get good traction straight away. The bias then moves forward as speed builds.

The Turbo X also gets an electronic limited-slip differential, or eLSD, at the back, which as well as transferring torque to the rear wheel with more grip can also influence cornering lines by increasing or reducing torque to the outside rear wheel, just like the E-diff of a Ferrari F430. All the better, then, to make use of Saab’s most powerful production engine to date: a 276bhp, 295lb ft version of its 2.8-litre, twin-scroll-turbo V6.

So the Turbo X is black and big-wheeled, it has rhomboidal tailpipes, its detailing is in a matt titanium look and it sits 10mm lower on stiffer springs and more movement-resistant dampers, self-levelling at the rear. The brakes are bigger too.

Then you get into the all-black, carbonfibre-garnished cabin and fire up. ‘Ready for take-off,’ says the instrument display, and it can also greet you by name in the unlikely event that you want your car to do this. The gearbox is a six-speed manual, the driving position and cabin ergonomics are as excellent as a Saab’s usually are. Might this, cheesy displays aside, be the Saab to make things right again? Well, it’s usefully quick: 5.7sec is the 0-62mph claim. Electronics intervene at 155mph. It sounds pretty good, too, especially from the outside, with a breathy V6 blare as the revs rise.

Boost builds quickly, witnessed by the gauge and felt by your body, but it’s not a torrent. There’s no point at which the engine lights up; it’s more an insistent but soft-edged shove across a broad speed-range. Drive gently and you can be extremely smooth, helped by the light, easy gearshift, but press on and the way the revs linger when you throttle-off gets in the way.

Turn the steering wheel from side to side as you accelerate and you can feel the eLSD trying to damp the wriggles. Pile into a curve and that damping effect happens again, although this time you might not want it. Forget any notions of flinging the Turbo X into a corner and tricking the system into a rear-biased tail-slide, because, on a dry road at least, it won’t have it. The Saab just grips and goes, utterly stable but frustratingly uninteractive. Yaw movements are stifled at birth.

Yes, I want to like this car. But while I appreciate its technical cleverness and failsafe demeanour, I am not excited by it. Good try, Saab, but your arrow has missed the keen driver’s heart.