Saab has tried to sharpen the 9-5 with revisions including greener engines and standard satnav - but will it be enough to save the slow-selling exec? 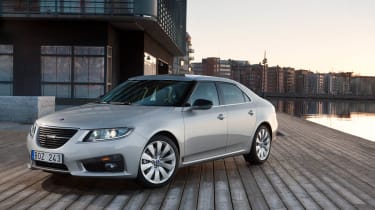 Saab is attempting to boost the showroom appeal of the 9-5 with a package of revisions set to be introduced across the range at the same time as the new ‘SportWagon’ estate goes on sale. These include both more efficient engines and standard satnav on all versions.

We’ve already driven the new, UK-specific chassis set-up that’s going to be given to all British-bound versions, but Saab has also announced trim and spec enhancements. Criticism of cheap-feeling materials in the cabin is being addressed with what’s described as ‘new dashboard fascia décor’ and classier-looking trim. All British cars will come with a DAB digital radio tuner as standard along with satnav featuring an 8-inch touchscreen and HDD storage for mapping data.

No new engines are being offered, but Saab says that CO2 figures are going to fall across the board by an average of nearly 5 percent. That means the entry-level 2.0 TiD diesel is set to put out just 125g/km of CO2 as a saloon and 128 g/km as an estate.

Prices have been reduced slightly across the board, with the range now priced from £26,995 for the entry-level TiD Vector SE saloon to £39,195 for the Aero 2.8T XWD SportWagon.

Saab production has suffered from severe disruption in recent months after disputes with suppliers led to a shutdown, but the company claims that investment from two Chinese carmakers has secured the company’s short-term future.