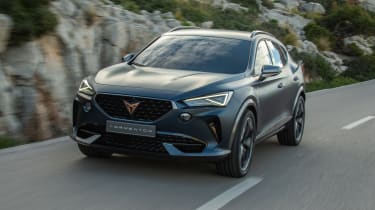 SEAT’s performance spin-off brand Cupra revealed its second model at this year's Geneva motor show, after the 296bhp Ateca last year. Called the Formentor, this compact plug-in hybrid SUV is touted by the Spanish brand as a concept, but its veil is awfully thin. That’s because this model is likely to be seen later this year as the brand’s first bespoke offering.

We know this for a few reasons. Firstly the Formentor has been rated in the latest WLTP cycles for emissions and EV range – quite an exercise for just a ‘concept’. Other telltale signs are the production-friendly door mirrors and door handles. Specific details about the powertrain remain scarce, although Cupra quotes a total system output of 242bhp, and the ability to be driven up to 31 miles on pure electric on the latest WLTP cycle. Power will be sent to the wheels via a dual-clutch semi-automatic transmission. However, Cupra has also mentioned the fitment of a limited-slip differential. Does this suggest the production Formentor will be front-wheel drive?

> Click here for our review of the Cupra Ateca

Looking through the Volkswagen Group’s current catalogue of plug-in powertrains, we suspect that the Formentor will use either the 1.4-litre turbocharged petrol unit from the Golf GTE, or the rumoured incoming hybridisation of the 1.5-litre ‘evo’ turbocharged petrol engine. The figures for the current Golf GTE stand at 201bhp combined, which is quite a drop compared to what Cupra is quoting for the Formentor. 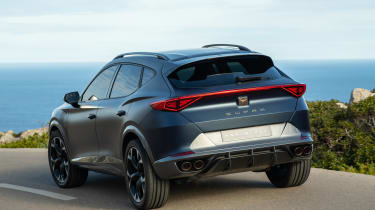 Cupra has yet to release any images of the interior but suggests that it’ll be dominated by a new 10-inch floating infotainment display, likely integrating the latest touchscreen interface employed within the VW group.

It’s difficult to gauge the Formentor’s actual size, but we suspect it’ll be longer, wider and lower than the Cupra Ateca, which has a more upright stance and practical cabin. The sloping roofline and full-width rear light bar make unsurprising appearances, but it’s definitely a more distinctive design compared to the straight-laced Ateca, and will give the Cupra brand some much-needed weight in its pursuit of being an independent brand.