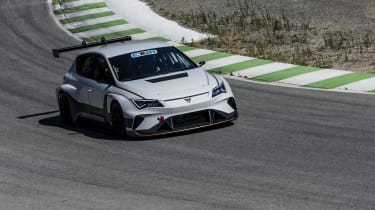 Think electric racing and your first thoughts probably turn to Formula E, the single-seater series set to enter its fifth season later this year and whose profile is rising as more manufacturers – such as Mercedes-Benz and Porsche – make commitments to enter.

But tin-tops will play a part in electric motorsport too, and one of the first to throw its hat into the ring is SEAT – or more specifically, the Spanish brand's tuning arm Cupra.

First presented at the 2018 Geneva motor show, the Cupra e-Racer is the firm's take on an electric-powered production-based TCR car, and it's now made its dynamic debut at the Castelloli circuit near Barcelona.

The early testing is designed to figure out how the car behaves ahead of a planned all-electric TCR series in 2020, and is being used to assess the car's performance, driveability – including acceleration and braking response and energy recuperation – as well as battery performance. 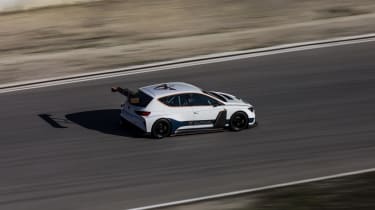 Once the car's performance and reliability is in no doubt, the team will then look ahead to improving lap times – with the aim of beating conventional internal combustion-powered TCR cars on the track.

‘With the CUPRA e-Racer we want to prove that the future of competition in electric, and that an eTCR is just as competitive or even more so than petrol-powered race touring cars’ explained Cupra racing director, Jaime Puig. ‘We trust that the results of the tests we are performing on the track will help encourage other brands and hope to see the eTCR category become a reality in 2020.’

While the car needs work on braking – it's around 400kg heavier than a conventional TCR racer, so its brakes have a lot more work to do – the acceleration from the 670bhp pair of electric motors was praised, as was the low centre of gravity, a result of the low-mounted 65kWh lithium-ion battery pack. 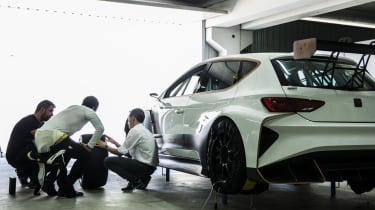 By way of comparison, the conventional Cupra TCR manages an output of 325bhp from a turbocharged four-cylinder – slightly more than the production car on which TCRs are closely based – and sends its power to the front wheels, where the e-Racer is rear-wheel drive.

This considerable power sees 0-62mph dispatched in 3.2sec, and 0-124mph in just 8.2sec. The e-Racer implements redesigned aero and cooling to suit the electrified powertrain.

Speaking about the e-Racer and the future of touring cars, SEAT Vice-president for R&D, Dr. Matthias Rabe said ‘we are committed to the eTCR because we are convinced that the future of competition is in electric engines. Just as the SEAT Leon Cup Racer laid the technical foundations of the TCR championship, once again we are blazing trails in this new experience.’ For this reason, Dr Rabe encourages ‘the rest of the car manufacturers to join us in this amazing adventure.’

In order to streamline the development process, Cupra has opted for 3D-printed components in its track-only Leon Competicion
​SEAT Leon Cupra review - more excitement than a Golf GTI?

The SEAT Leon Cupra is at the end of its lifespan, but has only become better with age
SEAT Leon Cupra R ST Abt 2020 review – spicy Spanish dish gets even more sizzle