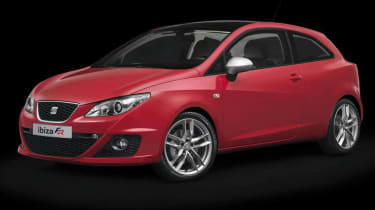 Brand new is the Ibiza FR. It gets the VW group’s 1.4-litre TSI twin-charger engine, which gains both a turbo and a supercharger. It’s a similar unit to the one in the new Ibiza Cupra, but in a lower state of tune – 148bhp represents a 20 per cent deficit, but the Cupra’s seven-speed DSG twin-clutch transmission remains, complete with steering-wheel paddles.

Like the Leon FR, it gains SEAT’s XDS system which works with the stability control, improving traction by braking wheels that lose grip. In fact, the Ibiza FR is far from playing second fiddle to the pricier Cupra, boasting an abundance of acronyms (ESP, XDS, TCS, EBA, ABS) as well as hill hold control, tyre pressure monitoring and cornering foglights, among other tech.

The FR’s exterior is a tad subtler than its bigger brother’s, however, with silver mirrors, new 17in wheels, twin tailpipes and mildly beefed-up bumpers the tell-tale signs. SEAT Ibiza FR prices should be around £14K, with sales later in the year.

Taking pride of place at the top of SEAT’s performance range is the revamped Leon Cupra. Changes over the outgoing hot hatch are few; a good thing, as it’s a very competent car.

Its 237bhp 2-lite TSI engine remains as before, which still puts the Leon at the forefront of powerful hatches, especially when you consider its sub-£20K list price. Like the FRs, it gets the trick XDS technology. Main tweaks affect exterior styling (new 18in wheels, reshaped bumpers, black honeycomb vents) and an improved interior, boasting chunky Cupra bucket seats. Along with the rest of the Leon range, prices should be close to those of the outgoing Leon, with the Cupra costing £19,485. That’s around three grand cheaper than its VW Golf GTI cousin, which is 30bhp worse off…