The SEAT Leon Cup Racer will compete in the six-race Eurocup series. Details and prices here 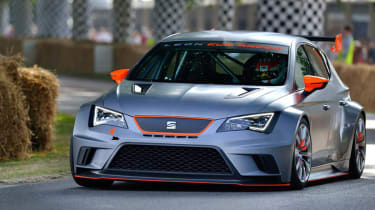 SEAT has announced a racing series for its new Leon Cup Racer. And if you aren’t a huge motorsport fan, there’s still significance here; expect next year’s Leon Cupra hot hatchback to take substantial styling cues from the Eurocup car.

The SEAT Leon Eurocup starts in May 2014. It’s a six-weekend series across Europe with a ‘substantial prize money pot’ promised. Good job really, as the car itself costs 70,000 euros (£58,000) excluding VAT. A series designed for privateers, it will span six European countries, with exact locations confirmed in due course. Race weekends will run from Friday to Sunday and include two free training sessions, qualification, and two races.

The Cup Racer isn’t too far removed from showroom Leons, despite its vibrant looks. It stays front-wheel driven, a 2-litre turbocharged four-cylinder engine boosted to 325bhp and 295lb ft of torque, up over 100bhp and around 40lb ft on what we expect the new Leon Cupra hot hatch to produce.

The engine is mated to a six-speed DSG twin-clutch gearbox, yielding an experience more accessible (if a bit less authentic) than a typical racing sequential transmission. An electronic limited-slip differential remains, rather than a more focused mechanical item.

The order books for the Leon Cup Racer are open now, with deliveries in April 2014, a month ahead of the Eurocup season opener.