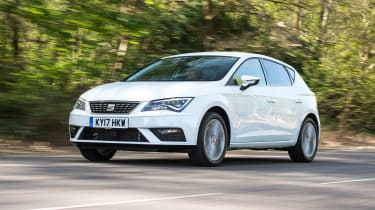 SEAT’s billing as the sporting division in Volkswagen’s brand portfolio has sometimes been a bit tough to stomach, but with the Leon that’s pretty much redeemed. There’s no denying that in sharing the majority of its underpinnings with its sister brands Volkswagen, Audi and Skoda there are similarities to how all these cars drive. However, the Leon is a credit to the Spanish firm’s chassis engineers in making the Leon that little bit more engaging.

Perhaps surprisingly it's the S and SE models that deliver the best ride and handling compromise on the road. Like all VW products based on the MQB chassis, the Leon is a composed performer through a series of corners. The steering lacks a little in feedback, but it features natural weighting and rate of response, allowing you to place the Leon accurately. There's strong grip and body control is remarkably good for a common or garden hatchback. In fact, the SEAT can be hustled along twisting back roads with remarkable poise.

However, the FR versions are more of a mixed bag. Stiffened and lowered suspension promises a sportier driving experience, but the reality doesn't match the promise. The chief culprit is the suspension, which feels too firm yet offers no real benefits in roll resistance or body control. Bumpy roads that the SE flows down are more of an issue for the FR, which finds itself crashing and fidgeting along. Sharp ridges are a real problem as they send a jarring crash through the structure.

FR versions also get the XDS differential, which aims to mimic the effects of mechanical set-up by reducing understeer and boosting traction. It works effectively when specified as an option on lesser models, but on the FR you're more aware of it working away, nipping at the brakes to try and keep the car locked on your chosen line. Carry lots of speed into a corner and the system is so eager to engage that the braking effort actually slows the car, which is a little frustrating.

The FR also suffers from the same over servoed feel to the brakes that blighted its predecessor and makes stopping smoothly a challenge. Strangely, the smaller disc set-up of the SE has a more progressive and predictable pedal action.