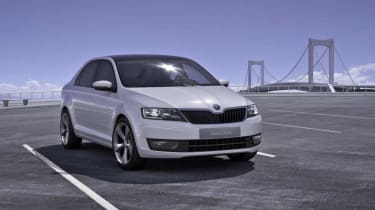 VW group chose to kick the Frankfurt motor show off with a multi-brand preview evening, which gave it a chance to introduce plenty of upcoming new metal from its various subsidiaries.

First, the Skoda MissionL, a strange name for a very normal-looking concept, in this case a ‘close to production’ compact saloon effectively demonstrating a new model that will be going on sale in a few months’ time, and which will be aimed at the Indian, Russian and Chinese markets as well as Europe.

We’re promised that the production MissionL, which will get a more normal name, will be the start of a Skoda ‘model offensive’ that will see the brand launching a new car every six months or so for the next few years.

It’s a smart-looking thing – the design is both clean and minimalistic apparently – although not likely to set the world ablaze, it should prove popular in the parts of the world where Skoda is determined to expand. Sales in India begin later this year, with the car being introduced to the rest of the world throughout 2012.

Seat has used Volkswagen’s preview party at the Frankfurt motor show to introduce the IBL concept, a clear hint at its replacement for the lacklustre Exeo.

Officially the IBL doesn’t preview a specific new model, but reading between the lines the combination of its 4.7 metre length, and the concept’s ‘saloon coupe’ configuration, are clearly intended to show that VW’s Spanish subsidiary hasn’t given up on larger models.

Like Skoda, we’re also promised that Seat is intending to ‘embark upon a product offensive that will see the spirit of the IBL reflected in several series-production models.’

It’s a styling concept, meaning that there are few technical details to bring you, although we’re told that the IBL is a plug-in hybrid. 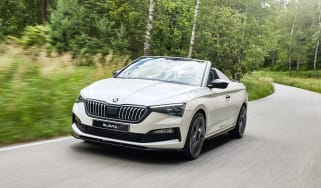