Skoda sharpens up the stalwart of its range, but without deviating too far from the established Octavia script 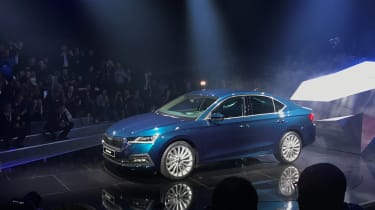 The all-new Skoda Octavia has been revealed, building on the model’s traditionally value-driven package with a sleek new look, lots of tech and electrified powertrains. Although its basic underpinnings are shared with the previous-generation Octavia, like the recently revealed Golf it does incorporate the biggest update to the widely used MQB platform yet. A new Octavia vRS is also on its way, but for now Skoda has just revealed details of the standard model in both hatchback and estate forms.

Starting with the basics, the new Octavia is 19mm longer than the previous version, and 15mm wider, improving the already vast interior accommodation and pushing it even closer to supposedly larger vehicles in the class above. All models feature a combination of transversely mounted turbocharged engines, connected to either a six-speed manual or seven-speed DSG automatic transmission depending on the engine.

Entry-level cars make do with the small but torquey 1-litre turbocharged three-cylinder engine found across the Skoda range, but 1.5- and 2-litre turbocharged four-cylinder units will make up a majority of the petrol offerings. Of these, the 1- and 1.5-litre petrol engines come with a 48V mild-hybrid system when fitted with the dual-clutch transmission, while a plug-in version will also be available combining a larger electric motor and lithium-ion battery pack with a 1.4-litre turbocharged four-cylinder to become the most powerful model in the range so far at 201bhp. A 2-litre diesel is also available in three power outputs, again with the option of both transmissions. Most versions are front-wheel drive, but top-spec 2-litre petrol and diesel models both feature a Haldex-style all-wheel-drive system in combination with a DSG as standard. 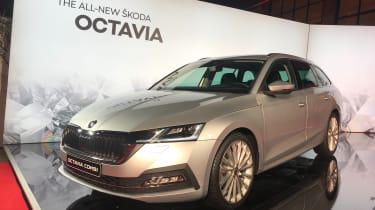 The exterior design direction doesn’t stray far from that of the current model, but does bring with it a taut new surfacing quality that helps the new Octavia to look more resolved, and therefore premium. The lines are crisp and sophisticated, headlined by the addition of a clamshell bonnet that keeps the nose looking sharp and clean. New LED head and tail lights only add to this impression, the former featuring matrix beams for the first time.

The interior features a far bigger step change however, with an entirely new dash layout dominated by new digital interfaces, similar to that seen in the recently revealed Golf Mk8. Dominating the dashboard is the central screen, which is 8.25 or optionally ten inches across, that now floats atop the dash for easy reach. This is not integrated into a single bent pane as in the Golf, the Skoda instead maintaining a more traditional dial set, or optional 10.25-inch digital dials. Where the Skoda differs is the more ornate design compared to that of the paired-back Golf, featuring extensive use of textured fabrics on the dashboard and chrome detailing. The Octavia has also moved to the usage of a smaller gear selector on DSG models too, cleaning up the centre console, although storage doesn’t appear to have been improved.

What we’re really interested in though is how the new Octavia will drive, and the hotter vRS models that will soon join the range. It’s expected that, like previous generations, it will share its powertrains with the Golf GTI, while also offering all-wheel-drive diesel versions too, possibly utilising the 237bhp twin-turbocharged 2-litre unit found in the larger Kodiaq vRS. The petrol vRS could take one of a few different powertrain routes however, possibly integrating either a purely internal combustion four-cylinder petrol, or one fitted with a mild-hybrid system in various states of tune.

The new Skoda Octavia hasn’t changed massively over the previous version, then, but it’s a formula that has worked for the Czech brand over the last three generations, so it makes sense not to stray too far from the proven recipe. Rather, the new Octavia keeps floating ever further from its economy car roots. Whether the price point in the UK reflects that remains to be seen.

Will the new Octavia vRS make our top 10 hot hatches list when it arrives? Here's out current pick of that segment...