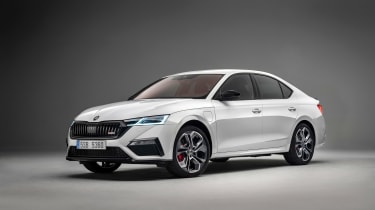 Skoda’s new Octavia has been revealed in its sportier vRS guise, matching the standard model’s sharp styling and tech-filled interior with a familiar 242bhp plug-in hybrid powertrain and a firmed up chassis. Skoda has yet to confirm details of pure petrol or diesel versions of the vRS, but rest assured they’re coming.

For now though, the plug-in powertrain is one that’s become increasingly familiar from the recently revealed Volkswagen Golf GTE, Cupra Leon PHEV, Cupra Formentor… the list goes on. As with those models, power is generated by a 1.4-litre turbocharged four-cylinder petrol engine and electric motor, that together produce a peak of 242bhp and 295lb ft of torque. 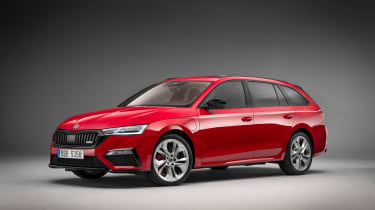 The combined combustion and electric power is then sent to the front wheels via a six-speed dual-clutch transmission, and will goad the Octavia vRS to 62mph in a somewhat pedestrian 7.3sec. This powertrain option is a response to those who want the vRS look and feel, without the associated running costs of a ‘real’ vRS, but then the same could be said of the diesel vRS models that precede it.

Unlike the Volkswagen and Cupra, the Skoda’s most powerful petrol-only engine option will likely be the 242bhp 2-litre TSi unit found in the standard Golf GTI, rather than offering a more potent 300bhp-ish motor like the Cupra and upcoming Golf R. 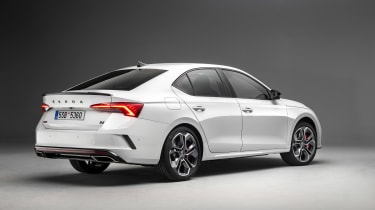 The interior has been given a similar treatment, full of Alcantara and perforated leather surfaces, subtle silver contrasting stitching and quilting on the sports seats. The interior is otherwise identical to the standard Octavia, which is no bad thing, as it adopts the latest infotainment hardware from the new Golf and Leon.

UK specifics have yet to be revealed, but expect the vRS to be available mid-year in the UK for around £32,000, with petrol and diesel models to follow. 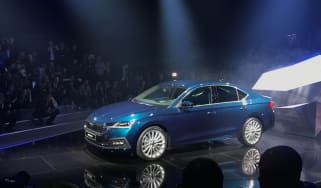