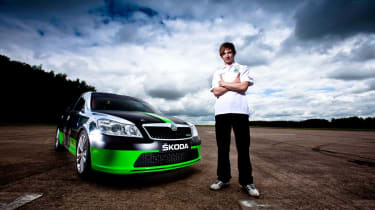 Skoda’s Ricky Elder talks us through some of the technical issues his team encountered designing the Octavia vRS racer that our very own Richard Meaden will be driving at Bonneville Speed Week in August.

Q: Were you surprised when the request came to build a Bonneville racer?

A: And some! We’re the technical service centre for the Volkswagen Group in the UK so we get involved in all the projects. But when they asked us about this one we thought ‘yeah, how hard can it be?’ We got that one wrong…

Q: So what are the big challenges with making an Octavia that can do 200mph?

A: Where to start? The deeper we looked into it the more we realised it was a mammoth task. Not so much building the car, although that obviously took some doing, but in terms of making sure everything meets with the right standards over there. We can’t get across there and discover something’s wrong. It’s so important to get it right that we actually flew Jim Miller, the chief scrutineer for production cars at Speed Week, over here to look at the car. Fortunately he said it was fine, we just had to do some minor stuff.

Q: So what are the big technical challengers for a Bonneville racer?

A: Well the big ones are power and cooling. If you’ve not got the power you’re never going to go quickly enough. And if you’ve not got the cooling then clearly you’re not going to last long… We went to Revo, our technical partners on this, and asked what’s the best way of getting power out of these engines.

Q: And they suggested a massive turbocharger?

A: Yes, among other things. We’re going to use 120 octane racing fuel along with methanol injection. The reason we need the methanol is because at high revs the injectors are running flat out – a constant 12 volt feed – so we can’t get any more fuel through them. If this was the old TFSI engine then we could run a set of Audi R8 injectors in it. But because it’s the new TSI motor there’s no development out there for a higher flow injector – so we’ve had to come up with a different solution to keep the octane topped up – two simple methanol injectors in the inlet tract. It’s mixed with water, 50:50, to cool the intake charge down. That will help create power, but the methanol will top your octane up and give you a better burn and help lean your engine off.

A: No, but the temperatures are going to be stratospheric – 40, 45-degrees ambient. You’re in the middle of an arid desert, it’s dry and there’s no serious humidity. Because of that the effective altitude fluctuates. It’s at sea level – it’s a lake bed – but the oxygen content is the equivalent to anything between 4 and 7000 feet. That means the turbo has to work harder to get the same boost pressure and there’s less air coming through the radiator. We’ve made an educated guess on cooling, the new rad takes ten litres of coolant on its own – it’s massive – but it’s going to be far easier to warm the car up if we over-cool it than it is to find extra cooling.

Q: And how have you worked out the gearing?

A: Again, it’s a best guess. We’ve got a combination of wheels and tyres to enable us to adapt to the conditions. On paper, it’s perfect – the right revs for that gearbox [from an Octavia Greenline] in fifth translates to 201mph. But then there’s wheel slip to take account of – from the second he pulls away, Dickie’s going to have the front wheels slipping. The faster you go the less it gets, but even at 200mph we’re expecting four to six percent wheel slip – and that means that even if the wheels are turning at 200mph the car will only be doing 190mph.

Q: And why have you chosen to remove the front brakes?

A: Because we don’t need ‘em. There’s no grip to accelerate so there’s definitely no grip to stop – if you stamp on the brakes on the sand you’re just going to lock up. There’s the parachute to stop, and we’ve kept the rear brakes so that Dickie has some braking control when manoevering, but the main problem we had was putting the 15-inch steel wheels were using onto the hubs – the front brake discs are bigger than the inside of the wheels. Getting rid of them removes drag, unsprung weight and friction too – it’s like three birds with one stone. And even after Dickie’s done his nine mile run he’s still got another 100 miles to go before he hits anything...