Live updates: Skoda on the Salt 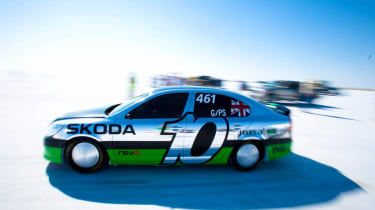 SKODA ON THE SALT

Dickie's filed a final blog from Bonneville - describing both his record-breaking run, and how it very nearly went horribly wrong...

He's done it! Confirmation comes in from America that Richard Meaden and the Skoda Octavia vRS have managed to break the official G/PS record at Bonneville with a new top speed of 227.080mph. That means that Dickie gets to join Bonneville's 'red hat' club for those who have set a record at over the double-ton. Big congratualations to everyone in the team!

Here's something a bit special - video from Bonneville of one the run where Dickie posted 216mph!

Dickie's just filed another update from the salt. Keep everything crossed as the record gets nearer!

The latest from Dickie and the team in Bonnevile is that the Skoda Octavia vRS has hit 215mph (though a 214mph average), so just a few more mph needed for a class record. Fingers crossed for today!

Tuesday was a (relatively) quiet day at Bonneville - with no more records falling - but we've uploaded another gallery of images from the salt. You can find it by clicking here

Check out Dickie's latest video blog - including some in-car footage as the Octavia gets into its stride on the salt flats.

Click here for a huge gallery of images from the 2011 Bonneville Speed Week. 16 lovely hi-res photos taken by Paul Madden.

One record has already fallen – the Skoda Octavia vRS that evo’s Richard Meaden is driving in the Bonneville Speed Week has won itself a place in the history books as the fastest ever Skoda, having recorded a peak time of 202.15 mph after its first day of timed runs on the salt.

The time was set in the car’s final run yesterday – and it will be back on the salt later today chasing the outright class record for a 2.0-litre production car, which currently stands at 216mph.

Dickie is filing updates from Bonneville exclusively for evo, and you can read his latest blog here and follow his progress on Twitter @dickiemeaden.

Dickie has been keeping busy since he arrived at Bonneville for Speed Week. Check out his video blogs: