evo's Richard Meaden has smashed the previous record for a 2.0-litre production car at the Bonneville Speed Week, posting a time of 227.080 mph 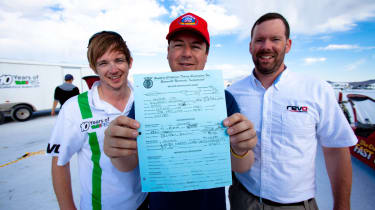 The record in the so-called G/PS category means that Dickie is officially a member of Bonneville's 'red hat club' - those who have set a speed record at over 200mph.

The previous record of 216mph, held by a Mitsubishi Gallant, was brushed aside by the Skoda, with its record runs constituting one pass of Bonneville's five mile course at just over 225mph and then a return at 228mph. The record is actually quicker than that posted in the next most senior class, too.

'There was a big crosswind during the final run, almost blew me off the course at 228. Scary at the time but worth the palpatations,' said Dickie, 'I'm not big on hats, but I'll make an exception in this instance.'

You'll be able to read the full story of Dickie's record breaking in issue 162 of evo magazine. In the meantime, check out our previous posts, videos and galleries from Bonneville here.