The Skoda VisionC is a design concept that previews a more stylish saloon model. Details and pictures here 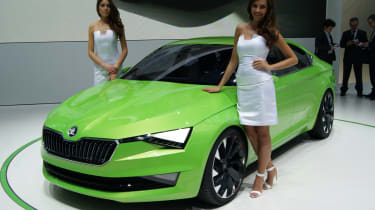 Skoda’s latest styling concept, the VisionC, has made its debut at the 2014 Geneva motor show. Pipped as a car to represent its future design language, the Vision C is a hatchback that apes the look of ‘four-door coupes’ such as its VW Group cousin, the Passat CC.

There’s more than a hint of Audi in its side profile and detailing, with angular headlights, and wide front wings, and a bold grille. Eye-catching 18-inch wheels also continue with these design ethics thanks to angular lines and contrasting surfaces, whilst small mirrors and handle-less doors help to reduce clutter, though these are hallmarks of a concept, rather than a production car.

The VisionC has been designed to provide plenty of interior space for four people and their luggage, while weight minimisation, a low centre of gravity and optimised aerodynamics should improve performance.

Under the concept’s bonnet is the 1.4-litre TSI petrol engine familiar from across the VW Group, here producing 109bhp with the ability to run on either petrol or natural gas. When running on the cleaner natural gas, the VisionC emits just 91g/km of CO2/km, a figure which currently falls below the UK car tax threshold. Being a design concept, the powerplant is almost an aside, and a production version of this car would no doubt run a plethora of TSI and TDI engines with a mixture of manual and DSG transmissions.

A production version of the Skoda VisionC would likely be a rival to the Mercedes CLA and Audi A3 Saloon, with a price tag below £25,000 to ensure it undercuts more premium competitors.