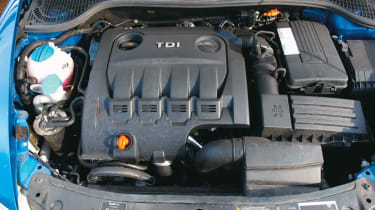 What’ll she do, mister? Well, according to the blurb, 48.7mpg on the combined cycle.

Even wearing my lead-filled boots, I could still maintain an easy 40mpg over a mixture of roads, which is pretty handy for a big, bulky hatchback that’ll reel off a 0-60 in less than 8.5sec and – more tellingly – has enough mid-range whoomp to worry mid-range 3-series BMWs.

This version of VAG’s 2-litre turbodiesel engine develops a stonking 258lb ft of torque at just 1800rpm. It is also mated to a slick, light-action six-speed manual gearbox so you can stay in the thick of the action (the urge starts to fade at 4000rpm and the red line is just 500rpm later). There’s more than a suggestion of throttle-lag, however, while it rattles and thrums like the worst sort of old-school diesel.

The vRS has always ridden and handled well, even if it can’t match its more glamorous cousin the Golf GTI for feedback and flingability. This diesel version feels a little nose-heavy compared with the petrol vRS, a little less instantly biddable, but once settled into a turn it flows through pleasantly enough and you can cover ground at a very impressive lick. It’s a good car, if not quite a four-star evo car. But you’ve got to do really, really big mileages to justify it over the petrol-engined vRS.