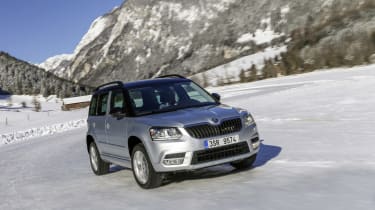 If the Yeti has a failing it’s on fuel consumption and running costs. It’s not the most youthful crossover model out there, with newer rivals bringing more tax- and wallet-friendly emissions and mpg figures. The 2.0 TDI 110 is the most economical, but it still only achieves an official combined economy figure of 64.2mpg in basic form, with emissions of 115g/km. That’s some way off the very best competition and if you’re buying it with company money that does mean you’ll be handing the taxman more of your hard-earned to run it.

That’s true across the entire range, as emissions figures are all relatively high; adding power and four-wheel drive does it few favours - the range-topping 148bhp 2.0-litre TDI model with 4x4 and DSG emits 144g/km and returns just 51.4mpg (rising to 55.4mpg and dropping to 134g/km if you opt for the manual transmission with the same engine). The 1.4 TSI 4x4 is worse than that, with emissions of 147g/km and a combined fuel economy figure of 44.8mpg.

However, the Yeti should be relatively cheap to maintain with fixed-price service options; £15.49 per month for cars bought when under one year old, or £21.49 per month for cars between 1-8 years old. Fixed-cost, mileage-related maintenance plans are also available. Many rivals offer that sort of cover as standard though, so the Yeti is not quite the value proposition you might expect given the brand’s budget roots.

Owners seem to love them though, while Skoda dealers are consistently singled out in satisfaction surveys for providing excellent service. The Yeti is a popular used choice too, which keeps values relatively high, which should mean sensible leasing and finance costs.