German tuning house Brabus is celebrating the ten-year anniversary of its first collaboration with Smart. 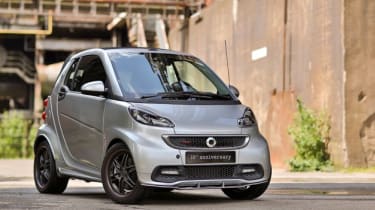 To celebrate the ten-year anniversary of the successful partnership between Smart and Brabus, the German tuning house has released details of another special edition Smart ForTwo.

The new model is called the ‘10th Anniversary edition’ and is painted in Liquid Silver with dark grey alloy wheels. The interior is trimmed in leather, with red trim and satellite navigation as standard. As with the standard Brabus models, power comes from the 100bhp three-cylinder turbocharged engine – pushing the Smart from 0-62mph in 8.9secs and on to the 96mph top speed.

Since the joint venture was set up in 2002, the company has sold more than 50,000 customized Smart ForTwo, ForFour, Roadster and Coupe models, and as the Smart-Brabus brand moves into the USA and China this year, there’s no sign of sales slowing down just yet.