More power, more aero and less weight are already on the cards for Stuttgart’s fastest Cayman 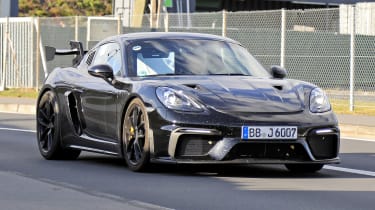 The standard 718 Cayman GT4 has only been with us since July, but we’ve already spotted a hardcore variant testing at the Nürburgring during Industry Pool. The model will likely adopt the ‘RS’ moniker – a first for the Cayman range – boosting aero, power and reducing weight.

We’re rather fond of the Porsche Cayman GT4 in standard form, with a handful of components from the glorious 911 GT3, a 4-litre naturally aspirated flat-six and a manual gearbox to go with it. Of course, this clearly wasn’t enough, and so Stuttgart’s boffins have set to work on a harder variant…

At the front, we can see that Porsche has fitted a new carbonfibre GT3 RS Weissach-style bonnet, complete with NACA ducts for increased brake cooling. Behind the B-pillar, on both driver and passenger sides, sit a set of louvers, presumably to provide the NA six with more air.

Most notable is the new rear wing, sporting more height and rake than on the standard GT4. The unit seen on the test car is also hung in the swan neck manner, and has much larger end plates, though as this is a prototype, it’s possible that these features won’t make it to production. 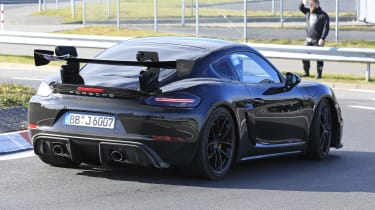 In standard 718 GT4 form, the 992-derived flat-six produces 414bhp and boasts an 8000rpm red line, but of course, these figures won’t stay untouched. As it’s a naturally aspirated unit, we don’t expect to see drastic increases, but a figure in the region of 440bhp wouldn’t be out of the question. The real question is how that power will get to the ground…

Though the GT4 is currently offered exclusively in manual form, a PDK option is on the horizon, and with the PDK-only 992 911 already on the market, perhaps an increase in power will see Porsche drop the manual from the GT4 altogether. Should both be available, we’ll receive six-speed manual and seven-speed PDK transmissions.

Elsewhere, the diffuser and exhaust system appear to be untouched. However, we’d be surprised if Porsche didn’t offer an optional sports exhaust system. The same 20-inch wheels and GT3-derived brakes as on the standard car can be seen on this prototype, and although wheel diameter is unlikely to see an increase, a lighter option may be on the table. PCCBs will be an option as before.