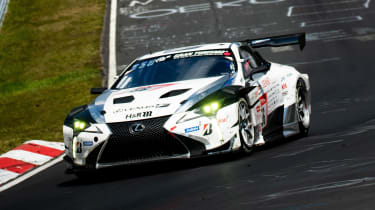 The car that this engine will likely feature in is the eagerly awaited Lexus LC F Coupe, a high-performance flagship version of the already brilliant LC500. Quietly announced alongside the confirmation of its Nürburgring 24 Hours entry, Toyota will be fielding a racing version of its LC Coupe fitted with this new powertrain, as well as a host of other upgrades to the body, aerodynamics, suspension and electronic driver aids which Toyota says ‘can be applied to its road-going models’

Toyota hasn’t revealed any specific information about the new V8, but it should bring about a substantial hike in torque – something lacking in the current naturally aspirated 5-litre V8 compared to rivals. Whether this new engine will be able to match the response and quite spectacular soundtrack of the current V8 remains the bigger question. 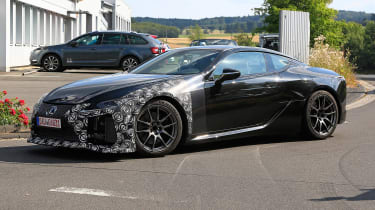 The Lexus LC is already an arresting shape on the road, but the spy shots of the F version show visible asymmetric coolers (either oil coolers or intercoolers) sitting inside the front bumper on either side of the spindle grille. While this may not confirm what engine will sit under the bonnet, it does infer the need for extra cooling, something that usually goes hand in hand with more powerful units.

Alongside the changes to the front bumper, Lexus has also widened the front wings and fitted smaller 20-inch wheels, although we would expect to see different wheels and bodywork on the production car. What this does indicate is the extra emphasis Lexus is applying to how the big GT will drive in F form, something the rear-wheel-steering system that is standard on the LC500 will only help with. At the rear, further evidence that the LC is likely to adopt the F nomenclature comes in the shape of the stacked rear exhausts – a distinctive styling feature used on all Lexus F models. 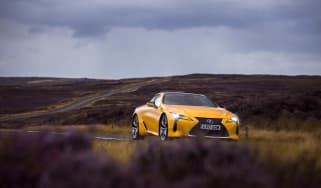