Official pictures of the Toyota GT 86's twin, the Subaru BRZ, revealed ahead of 2011 Tokyo show 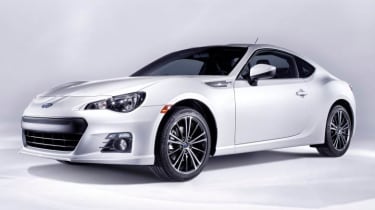 Both the Subaru BRZ and Toyota GT 86 make their debuts at this week's Tokyo motor show, and after official photos of the Toyota were released at the weekend, pictures of the Subaru have now surfaced, a day ahead of its launch. The BRZ uses the same 2.0-litre boxer four engine and will match the GT 86’s 197bhp figure. That means it should also boast a circa-7.0sec 0-60mph time and 140mph top speed. Subaru has said the car will weigh around 1220kg, which puts it close in terms of straight-line performance and power to weight ratio with a Renaultsport Clio 200 Cup, though it's rear-wheel drive rather than front and both Toyota and Subaru possess a choice of 6-speed manual or 6-speed auto gearboxes. A Subaru BRZ STI concept of was unveiled at last week's LA motor show, hinting that Subaru could be planning a hotter, turbocharged version of the BRZ, with a power figure of around 300bhp. Originally marketed as a cheap car that would introduce young people to a rear-drive chassis, both cars were reported to cost £20,000. However, when the pair go on sale next summer, prices are expected to be north of £25K.