Traditional sports car lines sullied slightly by iffy detailing. These cars are built to be modified though, and a different set of wheels would transform it 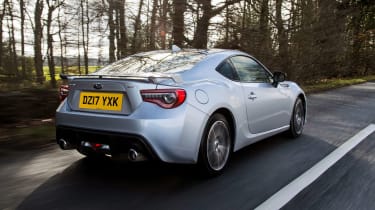 The BRZ is a car that pairs great sports car proportions, a low-slung stance and a generally tidy design, with an unfortunate number of ungainly details. Pre-2017 models weren’t bad in certain colours, but the 2017 facelift introduced some awkward angles into the front bumper, just as it did with Toyota’s equivalent.

The rear spoiler equipped on all BRZs is pretty naff too; however effective it might be, we’d be inclined to remove it to tidy up the otherwise pert styling at the back. A set of more serious, less ornate-looking wheels wouldn’t go amiss either, and you could enhance the styling further with a slight drop from an aftermarket suspension set-up.

However, one of the worst offenders when it came to tarnishing the BRZ’s exterior were the Lexus-style rear lights. Thankfully the 2017 model replaced the front and rear lights with LED units that are much classier.

Once again though, the Subaru BRZ looks much like the Toyota GT86. A slightly different shaped front end and some Subaru badges are all that really separate the two. However, you can’t get the Toyota in the same Subaru Mica blue, for it to match Imprezas of old. All it needs is some gold wheels...