It's time to say goodbye to the Impreza in the UK, and to mourn the loss of this icon we've got a gallery of some of the best models 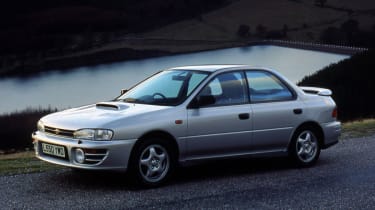 It’s been with us since 1994, but Subaru has recently announced that it has stopped importing the WRX STI into the UK, and has no plans to revive the model - better known as the Impreza - in the foreseeable future.

Its status as one of the all-time great performance cars was cemented in the late 1990s and early 2000s when the Japanese saloon car scooped up a number of WRC titles, with greats such as Colin McRae and Richard Burns at the wheel.

The company recently cut the price of its WRX STI model in the UK to £26,995, but extremely low demand due to high CO2 emissions and competition from ever-quickening hot hatches has killed the fast Impreza in the UK for good.

Here’s a gallery of some of the best models: