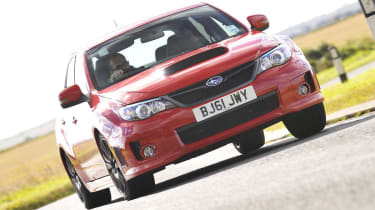 Subaru has imported its last WRX STI to the UK, with no plans to reorder any from Japan. It means that once current stock levels sell out, the performance saloon – until recently called the Impreza – will be absent from British showrooms for the first time since its introduction in the early 1990s. It marks the end of one of the most iconic modern performance cars, and one which has gifted us some spectacular special editions – the 22B, RB5, RB320 and P1 among others – as well as some famous rally victories, cementing British rally heroes Colin McRae and Richard Burns in World Rally Championship history books. ‘We have to react to the market conditions’, a Subaru spokesman told us. With annual sales quoted as around 250, it’s clear the STI’s high CO2 and relatively low levels of luxury no longer make it competitive against increasingly upmarket and more environmentally friendly hot hatchbacks such as the VW Golf R and BMW M135i. Subaru does say there are stocks that should last until late spring 2013, however, suggesting around 100 WRX STIs remain in Britain. But with the latest standard Impreza not sold in the UK and a performance STI relation not appearing on the horizon, it would seem to be the end of an icon. The firm will instead concentrate on its SUV sales – with the XV, Outback and Forester remaining on sale – while the BRZ rear-drive coupe, which is twinned with the Toyota GT86, currently has a waiting list and Subaru UK is pushing for bigger stock levels in 2013. ‘We’re not forgetting our performance heritage entirely’, our source insisted.

Click here for our review of the Subaru WRX STI

Pick up one of the best Imprezas for £18k