The Subaru WRX STI has enjoyed a substantial price cut, to £26,995, as well as a new 335bhp upgrade, driven here 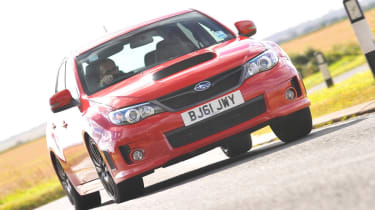 What is it? The Subaru WRX STI 340R, a new performance upgrade that coincides with a headline price cut for the sports saloon. WRX STIs now start at £26,995, with this power boost costing a further £1599. Technical highlights? The 320R upgrade is something we sampled on our 2011 long-termer, but this 340R upgrade is new, and hikes power from 296 to 335bhp, lifts torque from 300 to 361lb ft, and cuts the claimed 0-62mph time to 4.7sec – half a second quicker than a standard STI. The improvements are courtesy of tweaked ECU settings and a new exhaust system. At £1599, they also keep the car’s price below £29k. Short of importing some American muscle, you won’t get more power for the money. What’s it like to drive? Everything is pretty familiar as you first get acquainted with the WRX STI. It feels ‘proper’, with heavy (but satisfying) weightings to its pedals and gearshift. It feels proper on the move, too; there’s not a lot below 3000rpm, with some good old-fashioned turbo lag if you’re in the wrong gear, but keep above those revs and this thing’s fast, with a very linear punch towards its red line. It feels quicker than the 320R, and sounds better too. It’s got that characteristic old-school Subaru burble plus some enjoyably rally-esque chrrrrkkks and hisses as you exercise its boxer four. The extra power helps make the chassis work a bit harder. It’s just a shame the steering still feels horrid. It’s very light and loose around the straight-ahead and on turn-in, especially when you’re not in maximum attack mode. Drive harder, transferring more weight over the front wheels into corners, and it improves somewhat, but it’s still too vague and quells some of the confidence the car’s competent chassis and myriad diff settings otherwise build. It can be an awful lot of fun, though, the STI, and beside even the very best hot hatches it’s priced against, it has spades more character. How does it compare? The STI should always have been a sub-£30k car, and its price cut puts it in the same price bracket as front-wheel-drive hot hatches with much less power, as well as the Toyota GT86 and Subaru BRZ. It’s considerably faster and more interesting than the lot of them, but for sheer fun and dynamic talent, the RWD Toyota or Renault’s superb Megane 265 Cup are better bets. Anything else I need to know? If 335bhp sounds a bit much, the 320R upgrade comes highly recommended, giving the STI a subtler hike to 316bhp and 332lb ft. Like the 340R, it’ll demand high-octane fuel once fitted.