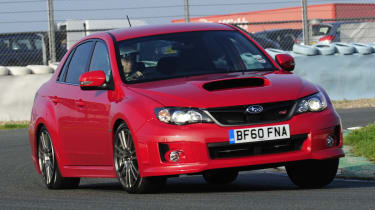 There isn’t a word missing from the headline above. Subaru has decided that the car you see on these pages will no longer be called Impreza, just WRX STI. From now on the famous name will be applied only to the more mundane variants of the model. It’s as if the company wants to distance itself from its past of Mica Blue paint (no longer available) and gold wheels (likewise), even though 60 per cent of the cars it sold were to fans of McRae, Burns and Solberg.

The other thing that’s missing from this particular WRX STI is the hatchback that we’ve become used to in recent times. Such was the clamour from those same rally fans that Subaru decided to bring the saloon back to the UK (in the States and Japan it never went away), though a five-door will continue to be sold alongside. I’m not really sure which I prefer the look of. I’d like to see an obscene WRC-style wing on the back of the saloon (and one is available in other markets), but apparently the latest thing in the Max Power world is to take all wings off and go with the clean look, so what do I know?

Well, I do know that the 2011 WRX STI is better to drive than its predecessor. The big news under both body-styles is that the car gets new ‘Spec C’ suspension, which sees spring rates up by 15 per cent at the front and a massive 53 per cent at the rear. The front and rear anti-roll bars are also thicker, the subframe bushes at the rear have been changed to improve camber stiffness and the ride height has been dropped by 5mm. In a final quest for increased grip and improved dynamics, the wheels have grown from 17 to 18 inches in diameter but have shed 2kg per corner in weight while the tyres have gone from 235/45 R17 to 245/40 R18.

The turbo flat-four is basically unchanged from the previous generation. Peak power remains 296bhp at 6000rpm, torque 300lb ft at 4000rpm. The most engaging thing is that the new exhaust system has a larger centre box and wider-diameter piping so that some of the distinctive boxer burble is back.

As soon as you climb inside the car it’s obvious that, even if Subaru lags behind European manufacturers in cabin design and pleasing plastics, it knows how to pick a good seat. The Recaros in the front are new and feel more aggressive in their bolstering, squeezing you particularly snugly just above your hips.

Press the starter button, depress the clutch, and the gearlever goes home as precisely but a little more slickly than before, which is nice. We’ve picked up our test car from just near the Eurotunnel in Folkstone, and even by the time we’ve journeyed the couple of miles to the train it’s obvious that this latest STI is much improved.

There are some good corners as we head south of Calais towards the circuit at Croix en Ternois. The roll when turning-in that afflicted the old car is gone and the whole chassis set-up feels pleasingly firmer and more direct. The steering has more meat, and inputs have a much more accurate and incisive result, so you can be more confident placing the car in a corner. The firmer set-up and wider tyres mean there is a slightly increased tendency to follow cambers, but you’re so much more connected to what the front end is doing that it’s not a problem. The ride is undoubtedly firmer, but the STI still rounds off the bumps well enough to ensure that it’s not an uncomfortable place to be.

So, it drives more like an Impreza should (yes, I know, but I’m sure everyone will call it that) and it looks more like an Impreza should, but it also costs more than an Impreza should. The price of £32,995 (for either hatchback or saloon) is up a hefty £5000 on the old model, an increase that Subaru blames on the poor yen/sterling exchange rate. This means the STI no longer undercuts Mitsubishi’s Evo on price, so it will have to rely solely on those improved dynamics when the inevitable twin-test takes place…