Low mileage, a celebrity owner and its reputation in rallying gives this particular Impreza plenty of appeal 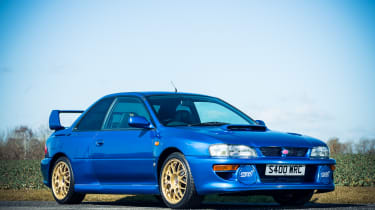 An example of one of the most desirable Subaru Impreza models will go up for sale with Silverstone Auctions on Friday, May 20th.

The 1998 Subaru Impreza 22B STi is undoubtedly one of the firm’s most iconic models, sharing its wide-arched stance with the Impreza WRC rally cars famously campaigned by Colin McRae.

But this particular car has a different sporting story, having been owned from new by British boxer and former World Featherweight champion “Prince” Naseem Hamed.

Not that “Prince” Naseem covered much distance in the car, which shows just 2500 miles on the clock and is in predictably immaculate condition.

The 22B was designed as a celebration of Subaru’s 40th anniversary and its third consecutive FIA World Rally Championship victory. Its wide body replicated that of the WRC car – itself the work of Peter Stevens – and beefed up the Impreza two-door’s body to a significant degree. 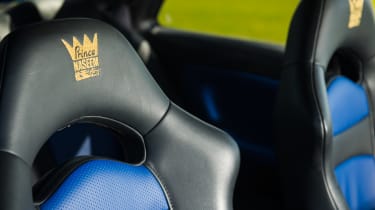 Performance was beefy too, with a 276bhp, 2212cc boxer (naturally) under the bonnet – larger than the Impreza’s typical 2-litre engine – with forged pistons, and a bigger turbocharger and intercooler.

The net result was a claimed 0-62mph time of 5.3sec and 150mph top speed, and this was still a time when Imprezas sounded much like the rally cars they spawned, with a wonderfully off-beat growl notably absent from more recent models.

By today’s standards it was also fairly lightweight, at 1270kg. The wider stance and modest mass makes it something of a B-road weapon, as do the adjustable differential and improved steering feel over the car it was based on. ‘Point the bluff blue nose down a bumpy B-road and the 22B is truly in its element’ said Richard Meaden of the car in our ‘future icons’ feature in issue 188.

That’s not only indicative of the car’s low mileage and celebrity owner, but of rising interest in such an iconic car produced in relatively low numbers – only 400 were ever sold worldwide.