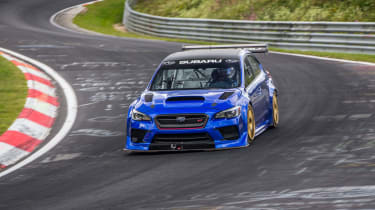 Subaru has smashed the saloon car Nurburgring record with a highly-modified version of its current WRX STI. With approximately 600bhp, the Subaru WRX STI Type RA NBR Special (that’s its full, official name) lapped the Nordschleife in 6min 57.5sec. That’s faster than Ferrari’s track-only 599XX and just half a second slower than Porsche’s hybrid-hypercar, the 918 Spyder.

Even in the dubious, unregulated world of Nurburgring records, the Type RA NBR Special’s saloon-car record, set by Richie Stanaway, can’t be compared to the ones set by the Alfa Romeo Giulia Quadrifoglio (7min 32sec) and Volvo S60 Polestar (7min 51.1sec), because it’s certainly not a production car. Instead it’s an all-out race car.

The Subaru that set the record was built by British motorsport and engineering company Prodrive. The two companies have collaborated for many years with Prodrive running Subarus in the World Rally Championship from 1990 to 2008, collecting three drivers’ championships in the process.

> Read our review of the Subaru WRX STI

It’s based on a US-spec WRX STI Type RA (RA stands for Record Attempt), a slightly lighter and more powerful version of Subaru’s four-door four-wheel drive saloon. The road car’s weight is reduced by using a carbonfibre roof and rear wing, and a set of 19-inch forged BBS wheels. Power’s up to 310bhp, from 296bhp, thanks to a retuned ECU, a cold air intake and new pistons.

Still, despite the improments to the RS, Prodrive thoroughly go over the car to turn it into the NBR Special. Its front and rear track have been increased, the interior has been completely removed and a complex roll cage has been welded in its place. The new arches cover 9-inch wide slick tyres. A low, floor-scraping splitter helps counterbalance an even bigger rear wing, while a massive carbonfibre diffuser fans out from the rear of the car. In total the aero creates 295kg of downforce at the car's top speed of 179mph. However, to reduce drag the rear wing can fold flat at the touch of a button on the steering wheel. 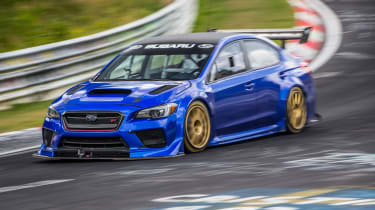 Unlike the road car’s 2.5-litre engine, the NBR Special uses a 2-litre rally-spec turbocharged flat-four. The engine puts out over 600bhp at 8500rpm. Drive goes to all four wheels through a six-speed sequential gearbox.

A Ring record is nothing, really, compared to the arduous task that Prodrive originally created this car for: breaking the the Isle of Man Snaefell Mountain Course lap record. At 37.7 miles and over 200 corners, the British road circuit is 21miles longer than the Nordschliefe and has at least 130 more bends.

The Subaru completed the lap in 17min 35sec with an average speed of 128.73mph crushing the previous lap record, held by a Subaru, of 19min 26sec, or 116.47mph. The significant leap in speed shows just how much more serious this current car is compared to the almost stock Subaru that set the earlier record.

Both of the Isle of Man records mentioned were set by Mark Higgins, three-time British rally champion. However the most memorable attempt at the Mountain Course lap record was in 2011, when the 19min 33.5sec time was totally overshadowed by an incredible moment through Bray Hill, a supposedly flat corner after a steep down hill section, where Higgings was travelling at 150mph.

The speed and extra weight of the camera gear added on a practice run causes the car to lose grip, Higgins then, skilfully, gathers up the high-speed slide in a calm and efficient manner. But, from just watching on-board footage, the entire situation looks utterly frightening. How Higgins had the resolve to complete the rest of lap is remarkable, let alone returning year after year to break the record.