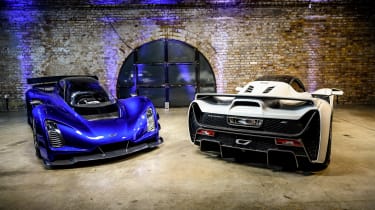 Up-and-coming supercar manufacturers are not unusual in our contemporary age of electric supercars, but there might be one or two reasons why Czinger, a new Los Angeles-based company, might just shine a little brighter than most. As McLaren found in the early ’90s, if there’s something that can set you apart from the crowd, an unusual seating arrangement can be it.

Designed, engineered, developed and manufactured in the USA, the Czinger 21C differs from almost all other supercars with its tandem seating position, placing the passenger behind the driver. Only seen elsewhere on various cab-leaning contraptions and the non-watertight Renault Twizy, the tandem nature of the 21C is, in Czinger’s words, designed for ‘optimal performance and weight distribution’.

Not only does the 21C differ by its layout, but also the fact this is no electric supercar. Instead it’s powered by a highly strung internal combustion engine connected to a hybrid system consisting of an electric motor and battery pack, for an output of 1233bhp and an 11,000rpm red line.

That figure is generated by the combination of a mid-mounted 2.88-litre, flat-plane crank V8 boosted by a pair of turbochargers and driven through a seven-speed automated manual transmission, along with a pair of electric motors, each powering a front wheel.

As you might expect with such a power output and a dry weight quoted as low as 1151kg (for a 1:1 power ratio, like the eponymous Koenigsegg One:1), performance figures are set to be rather impressive. Though a top speed is yet to be revealed, the 0-62mph sprint comes in a quoted 1.9sec, 0-186mph (or 300km/h) and back to zero in 15 seconds, and 0-248mph (400km/h) to back to nought in what’s probably quite an exciting 29 seconds. 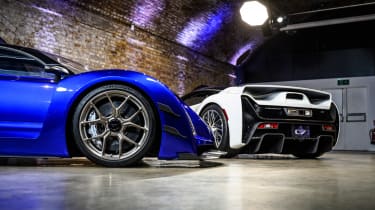 Top speed is a claimed 268mph, though Czinger will build a track configuration of the car which, thanks to extra downforce (790kg at 155mph, compared to the regular car’s 250kg) has a lower 236mph top speed (it’s all relative…) but greater cornering grip.

Something that Czinger does specify is its use of additive manufacturing and advanced composites, taking full advantage of new-age techniques to make the 21C as rigid and lightweight as possible. Peel back the layers and we can see carbonfibre torsional supports and 3D-printed nodes knitting the structure together in a similar way to a traditional tubular steel space frame.

Ever wondered what a 2.88-litre, 1233bhp, twin-turbo V8 hybrid hypercar sounds like? Wonder no more.

More than just being a lighter and less time-consuming way of producing these sorts of complex shapes, 3D printing also allows engineers and designers to reduce material in non-critical structural points, lending an organic aesthetic quality to these internal components. Complementing the contemporary structure will be fine, book-matched carbon exterior panels, and a simple interior with a single information display ahead of the driver.

Could Czinger be the next small manufacturer to break into the mainstream like Pagani and Koenigsegg have done before? We’ll get a better idea when first examples hit the road.